August 30, 2020 Techly DoRight
“Near the Day of Purification, there will be cobwebs spun back and forth in the sky.” — a Hopi Prophecy

Elon Musk’s SpaceX has sent hundreds of internet communications satellites into low Earth orbit, and has plans to launch thousands more such satellites in the near future. Other companies, among them Jeff Bezos’s Amazon, have similar plans. Within the span of several years, the number of satellites launched into orbit could double from the amount that have been launched since the beginning of the Space Age in 1957. The clutter could interfere with astronomers’ observations and measurements, and even with casual enjoyment of the night sky by lay people. 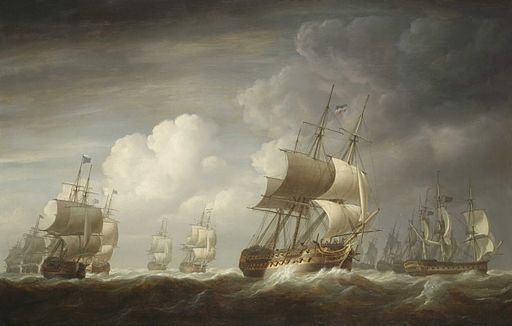 “A Fleet of East Indiamen at Sea”, an 1803 painting by Nicholas Pocock (1740-1821).
There are terrestrial alternatives to webbing near Earth space with tens of thousands of satellites in order to get internet service to rural communities around the world. in the United States, rural electric cooperatives have worked steadily for years to overcome infrastructure and regulatory obstacles to provide internet service along the last mile to their members. It is the big telecommunications and cable television companies, with their friends in big government, that have often made operations difficult for alternative internet service providers. Even when the local governments of towns and small cities try to cooperate with small internet service providers, their efforts are often undercut and overruled by larger government entities working at the behest of large corporations that will brook no competition.
Now comes SpaceX’s Starlink and Amazon’s Project Kuiper, backed by their founders’ deep pockets and enabled by their existing links to big government, links that will only strengthen and deepen as the companies take over near Earth space and provide launching and communications services to government agencies. The partnership with government may even prove to be the primary consideration for both companies, and providing internet service to private individuals a secondary, though lucrative consideration. The partnership could develop into a Space Age equivalent of the British East India Company’s close association with the British Empire, which saw the two entities merging in so many areas public and private that eventually one could hardly tell where one left off and the other began.
In addition to the Space Age, the modern era has come to be known as the Information Age. The internet via the world wide web has become the chief vector of information in these times and, as many have often observed, information is power. In the days when the British East India Company held sway along with equivalent companies sanctioned by other European powers, trade goods from far off lands were the valued currency that governments sought to procure and protect. Governments guarded the trade routes to and from the far off lands as well as the lands themselves. Over time, the various East India Companies adopted their own paramilitary arms to protect their interests. Similar relationships could develop in the coming years as companies seek the help of government in protecting their interests in space in return for providing essential services.

Why should SpaceX, for instance, invest hundreds of billions of dollars in the infrastructure needed to establish colonies in space with the potential for enormous profitability in the long run without being assured tens of billions of dollars in government contracts in the short term and the perpetual cash cow of providing internet service to billions of people every day? Look up in the night sky for answers and soon enough you’re likely to see the winking reflections off tens of thousands of satellites, glinting like dew along the strands of a spider’s web.
— Techly