As the Wind Blows

August 2, 2020 Editor
“The wind bloweth where it will, and thou hearest the voice thereof, but knowest not whence it cometh, and whither it goeth: so is every one that is born of the Spirit.”
— John 3:8, from the American Standard Version of the Bible.

The wind blows pollen from male trees in towns and cities across the country, and because there are far fewer female trees planted due to the perceived messiness of their fruits and seeds, much of the pollen lands instead in the breathing passages of people and animals, provoking allergic reactions. For trees, it’s an isolating and nearly sterile environment. Rain washes the pollen away from the streets and the houses and the cars eventually, but the people and animals have already inhaled more than some can tolerate.

A person can stand alone a very long time and be at peace, not feeling lonely, and until the wind whispers in their ear about the possibility of someone’s loving companionship they might stay alone, happily, for many years more. The wind has blown good news in that case, but it may as well have stayed calm and quiet. It is impossible to ignore the wind’s news, however, and in altered circumstances the person now realizes, oddly, how lonely life can be. 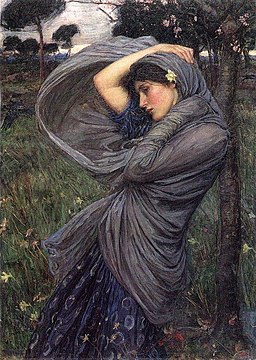 Would it have been better not to listen? Better to shut the windows against the noise, the pollution, the pollen, and everything else carried by the wind? Everyone has to make up their own mind about it, and things change and therefore minds change as well. Even a person who rarely feels lonely can suddenly understand what it means when experiencing the loss of a loved one, or when falling in love with someone whose absences leave a void filled only with reveries of times spent together and dreams of future unions.

Dutch harpist Lavinia Meijer performs “Metamorphosis Two”, by American composer Philip Glass. Mr. Glass wrote the piece in 1988 and recorded it in 1989, and in 2002 he incorporated it into his score for the film The Hours.
Patience with those gaps means as much as patience with one another in the times spent together. Being patient demonstrates trust in the other person and acknowledges vulnerability to them. There’s no use in rushing; haste will only create a shaky foundation. You don’t know where love came from, and much as you would like an end to anxiety by knowing where it is going, you can’t. A person might say, imploringly, to the wind if not to one’s beloved, “I didn’t know I was lonely until I met you, and now that I have fallen in love and experienced loneliness when we are apart, I wish an end to loneliness. Please comfort me by returning my love!” But all you can wisely do is listen, and open yourself up, and give generously without demanding a return. “Love is a thing full of anxious fears.” — Ovid
— Ed.