July 19, 2020 Isidore Gnome
Of all the ills afflicting bees, giants of a sort may not be among them, but mites may be implicated in their decline. If you believe the sort of giants that may be afflicting the bees worst of all, which is to say pesticide manufacturing giants such as Bayer and Syngenta, the primary culprits to blame for bee colony declines are not their neonicotinoid pesticides, but rather Varroa mites. The mites afflict honey bees, weakening them as they feed on the bees’ fat reserves and injecting viruses into the bees through their sucking mouth parts.
But all manner of bees and other pollinating insects are declining around the world, not just the honey bees that are afflicted with Varroa mites. Neonicotinoid pesticides work systemically by being absorbed into every part of a plant, including the flowers, attacking the nervous system of whatever invertebrate feeds on the plant, including the flowers. As the name suggests, neonicotinoids are derived from nicotine, a poison found in tobacco and other plants in the nightshade family.

Nicotine has long been applied topically to plants and insects as a pesticide. Japanese chemists synthesized Imidacloprid, the first neonicotinoid, in the 1980s. In the 1990s, Bayer began large scale manufacturing and distribution of the pesticide, which was an advance over plain nicotine on account of its solubility in water and consequent ability to disseminate systemically throughout a plant for long-term protection from insect feeding, rather than being restricted to the temporary effects of topical application. 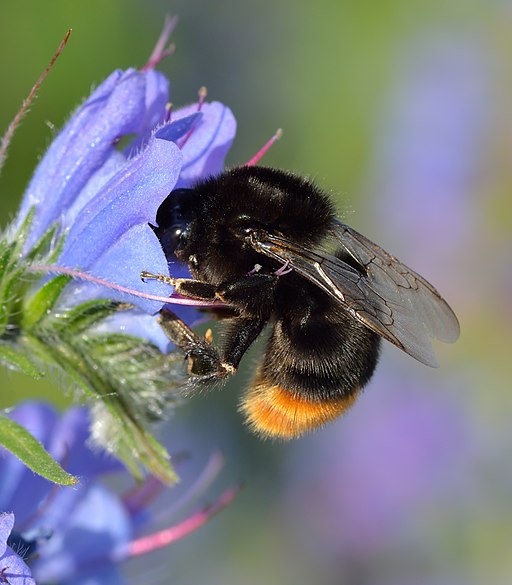 A red-tailed bumblebee (Bombus lapidarius) queen feeds on the flower of a blueweed (Echium vulgare) in Keila, northwestern Estonia. Photo by Ivar Leidus.
It’s interesting then that the pesticide manufacturing giants have followed the lead of Big Tobacco in muddying the research waters regarding their products. In the previous century, the tobacco industry fought efforts by researchers and regulators to fully inform the public of the dangers of tobacco use, generally by spreading the spurious claim that there was more doubt about the issue than there really was, and by persuading a vocal minority of clinicians and media flacks to side with them. This model has since been followed by the fossil fuel industry in denying the human causes of climate change.

A 2013 cover by Circe Link and Christian Nesmith of “Your Move” by Yes. One could choose to hear the lyrics in the background chorus as “Give bees a chance” instead of “Give peace a chance”.

Now, after scientists and environmentalists sounded the alarm about neonicotinoids in the late 2000s and early 2010s, the pesticide giants have adopted the same methods, and their fall guy, as it were, is the lowly Varroa mite, a creature difficult to like in any scenario. Bayer and Syngenta and the rest have been aided and abetted in their disinformation campaign by the current presidential administration’s Environmental Protection Agency, an agency rendered ineffectual in protecting the environment by the hiring of right wing ideologues who are all too eager to sow goodwill among multinational corporations by not allowing the collapse of bee populations to get in the way of reaping enormous sums of money. After all, what are friends for?
— Izzy