There’s a Term for That

July 5, 2020 Techly DoRight
Hypocognition – a term from psychology and linguistics meaning the inability to discuss or process a concept because of the lack of a word or words for it.

“Phubbing” is a portmanteau made up of “phone” and “snubbing”, and it describes the act of looking at one’s phone (presumably a smartphone) in order to avoid interaction with another person. It’s nearly always a rude action, and it can be dismissive and disrespectful when the phubber employs it to imply that whatever might be displayed on the phone’s screen is more interesting than the person in front of him or her. It’s a term that didn’t exist – and couldn’t have existed – before smartphones became ubiquitous.

People appear to have an ingrained reverence for the immediate demands of technological devices. Before smartphones, extricating oneself from an unwanted interaction in public meant having to invent excuses, such as an urgent appointment. Burying one’s interest in a book has never worked as well in closing off conversation as getting a phone call or even just looking intently at a smartphone’s screen. People will stop everything for someone who is on the phone, or nowadays only looking at one. 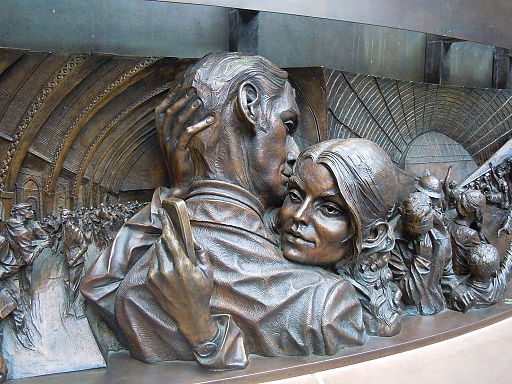 Detail of The Meeting Place, a 2008 high relief sculpture by Paul Day, on the concourse of St. Pancras train station in London, England. Photo by Patrice78500.
The concept of using one’s smartphone to rudely dismiss another person now has a name, “phubbing”, and therefore no longer falls into the category of hypocognition. There are numerous other fuzzy concepts that still qualify as hypocognition, at least for some people. The two groups at either extreme in their reaction to the coronavirus may be engaged in hypocognition, each of a different kind. There are the people who refuse to take public health measures seriously, and so endanger everyone; and there are the people who have allowed their fears to so intimidate them that they have imposed some unnecessary burdens on the rest of society in order to help them assuage those fears, as if they were unaware that everything in life carries an element of risk.

For example, say a white man is out jogging through a largely black neighborhood. This particular neighborhood is undergoing gentrification, by which everyone understands houses owned or rented by mostly poor blacks are being bought up cheaply by better off whites and then inhabited by them. The white jogger is new to the neighborhood, part of an influx of people who can afford nice things, and whose clothes generally reflect their status. But most folks would give this jogger a pass even if he wore old clothes with holes and tears for his exercise. No one in the neighborhood, black or white, suspects the white jogger is up to anything other than jogging.

Carl Reiner and Mel Brooks discuss the origins of some concepts in this clip from a portion of their ever changing 2000 Year Old Man improvisational comedy routine. This 1967 appearance is from the television program The Colgate Comedy Hour. Comedian Dick Shawn introduced them. R.I.P., Carl Reiner (1922-2020).

Now take the same circumstances and flip them 180 degrees, with a black man jogging through a largely white neighborhood. The black man lives in the neighborhood, and thus people don’t consider he has any gentrifying influence, no matter whether the neighborhood is working class or upper middle class. The black jogger wears neither very good nor very bad clothes for his exercise. All other factors being neutral, he’s just a black man out for a run through a white neighborhood. Think about what might happen. The black jogger does, all the time. The white jogger in the other neighborhood, he never has to consider the possibility of something bad happening to him, simply because of who he is. That’s white privilege.
— Techly