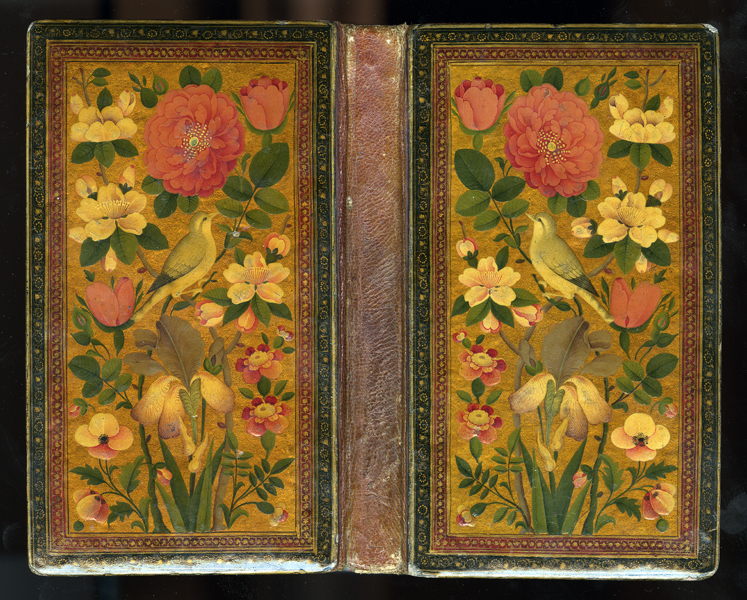 Binding of a Divan of Hafiz, from April 5, 1842 in Iran. Original lacquer “gul-u-bulbul” (flower-nightingale) motif with gold, red, and black decorative frame. The metaphorical relationship of the nightingale (active lover) and flower (passive beloved), frequently used in Persian poetry, especially by Hafiz, serves as an appropriate theme for the binding covering this manuscript.
The French musician and composer Camille Saint-Saëns wrote incidental music in 1901 for a play called Parysatis, based on a novel by the French archaeologist and explorer, Jane Dieulafoy. The play, about an ancient Persian queen and produced in 1902 for a summer festival in the southern French town of Béziers, has not stood the test of time as well as Saint-Saëns’s music.
“Le Rossignol et La Rose” is a musical piece for wordless voice in Act II. The title in English is “The Nightingale and The Rose”, and refers to Persian symbolism around love. There is a peculiar 1888 short story by Oscar Wilde titled “The Nightingale and The Rose” which is unrelated to music for the play Parysatis or to the play itself. Wilde wrote his story ostensibly for children, but its deeper themes are really beyond their understanding. Reading Wilde’s story is nonetheless instructive about love because of how he frames respect as an integral part of love.
Natalie Dessay sings “Le Rossignol et La Rose”, by Camille Saint-Saëns. Is the song sorrowful? Joyful? That probably depends on the mood of the listener. The pacing lends an air of melancholic contemplation. The song contains within it, in other words, the varied emotions of love itself. Incidentally, Ms. Dessay has sung the lead role in Igor Stravinsky’s 1914 opera Le Rossignol (The Nightingale), notably for a trippy French film adaptation in 2005 which aired on American public television. Stravinsky based his opera on an 1843 story by Hans Christian Andersen.
Without respect there is little in love beyond shallow self-interest and the words spoken sound out hollowly, like an echo. Giving respect to another is as essential as giving love, indeed is at the heart of love. Where there is little or no respect, there is little or no love, no matter the words uttered. Respect is demonstrated, is shown to another as well as to oneself. Understanding and remembering this is crucial if love is to deepen and widen beyond the initial merging of two souls, where the two converge to form a third part all its own, its own world composed of and known only to the two lovers, like two circles partially overlapping. With respect comes trust, and with trust comes the will to acknowledge fears and the courage to not run away. And then there is music, bringing love ’round full circle by singing directly to the heart and soothing fears.
— Vita