February 23, 2020 Editor
The Democratic Party establishment is in a panic after Vermont Senator Bernie Sanders’s convincing victory in the Nevada presidential primary on February 22. An easy way to gauge the reaction of the Democratic Party old guard is to watch their mouthpieces spout off on MSNBC, the network that pretends to be at the forefront of liberal politics but in reality protects the interests of corporate Democrats like Hillary Clinton and Joe Biden. MSNBC is, with some reservations due to being more grounded in the real world, the opinion molder for many Democrats in a similar fashion to how Fox News affects Republicans.
This year the Democratic Party establishment had the fix in for former vice president Joe Biden the same way they had the fix in for former secretary of state Hillary Clinton in 2016. She lost the election, but hey, she won the popular vote! So what? So a surplus of a few million people, mostly in California and New York, voted for Hillary Clinton. It didn’t matter because their votes didn’t count as much as the votes of a few tens of thousands of people in Rust Belt states such as Wisconsin, Michigan, and Pennsylvania. So the Democratic Party establishment had decided to do it all over again, this time with Joe Biden as their old guard hack. 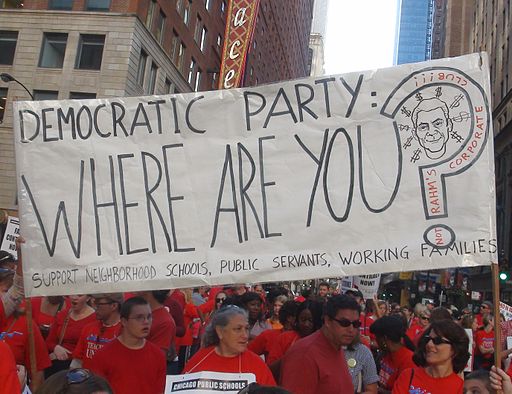 A banner displayed by striking Chicago teachers in September 2012 questioning the real interests of Chicago Mayor Rahm Emmanuel and his Democratic Party colleagues. Photo by Flickr user Groupuscule.
The old guard claims their anointed one is the most electable in the general election, a higher priority than ever now that everyone has had nearly four years experience of the alternative, the current president. Everyone, progressive and corporate Democrat alike, agrees four more years of that will destroy the republic as well as the Democratic Party. The old guard deploys fear of four more years of the current president to maintain themselves in power at whatever cost in lies and money. Claiming that only their front person has electability in the general election didn’t work in 2016, and it won’t work in 2020.

The reason is lack of broad appeal to potential voters who are inclined to sit on the sidelines instead of getting behind a corporate Democrat like Joe Biden. The Democratic Party establishment persists in under counting and under cutting the progressive, Socialist portion of the party because it scares off their backers on Wall Street and in corporate boardrooms. The country, and the Democratic Party in particular, are more liberal than the establishment and the corporate media will admit.

Woody Guthrie wrote and performed “So Long, It’s Been Good to Know Yuh (Dusty Old Dust)” in 1935. The policies and appeal of the president at the time, Franklin Roosevelt, would not look out of place today in the campaign of Bernie Sanders, yet conservative corporate interests in politics and in the media persist in portraying Senator Sanders and his supporters as fringe radicals.

The resulting propaganda from outlets like MSNBC convinces some voters that a presidential candidate such as Bernie Sanders would represent only a fringe of the Democratic Party, while Joe Biden or Michael Bloomberg or Pete Buttigieg would represent the mainstream of the Party, and therefore would be the only electable choice for the more conservative general populace. That’s not true. Look at the results in Nevada.
— Ed.