All We Want for Christmas

December 8, 2019 Techly DoRight
As much as we may see signs posted on residential and church lawns reminding us that “Jesus is the reason for the season”, for many of us Christmas remains a season for getting stuff, giving stuff, and receiving stuff, among other reasons for the season, like visiting friends and family and engaging in charitable works.
In the last 20 years, getting, giving, and receiving electronic stuff has particularly taken off because of the accelerating pace of improvements in technology, some of which are real improvements while others are invented or hyped by marketers. When it comes to electronic devices like smartphones and flat panel televisions, last year’s model is outmoded, and a model from two years ago is obsolete. That is the perception marketers would like us to have, and many of us are willing to go along with it. Whether that is because of a real need for the latest technology or merely as a way of signaling to others about oneself is anyone’s guess. 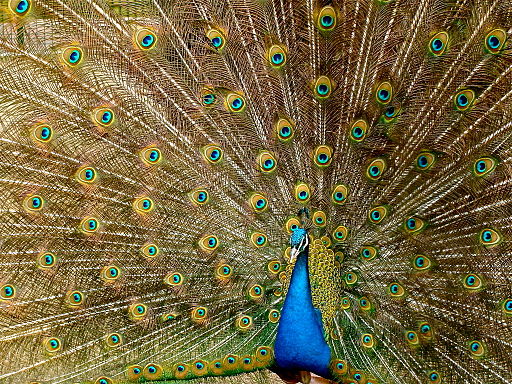 A Peafowl flaring his feathers. Photo by Jebulon.
Or it could be purely for one’s own gratification and sense of identity. All of us are what we eat, but some people are also what they own. It’s nice to have good things that work well, doing what they are supposed to do. The point of demarcation toward excess is relative to every individual, of course, though as a culture we can detect roughly when enough is enough, either in quantity or quality. That is, after all, what makes conspicuous consumption worthwhile to conspicuous consumers consuming conspicuously. If no one noticed or cared, there would be no point to it.

Certainly it can be necessary at times to replace broken or malfunctioning stuff, and the occasions for doing so with electronic devices like computer printers seem to pop up more frequently with each passing year. Any other reason, such as an obsessive desire for acquiring the latest and greatest, seems suspect, maybe not to the person doing the acquiring, but perhaps to observers. Some of those observers may even be the recipients of a latest and greatest type of largesse at Christmas.

A routine from George Carlin’s appearance at Comic Relief USA in 1986. What makes this piece poignant satire is Mr. Carlin’s presentation of it at a charity event focused on helping the homeless, who of course have very little stuff. Warning: foul language.

Do they need more stuff? Maybe not. Do they want more stuff, or stuff of better quality than their current stuff? Maybe. When it comes to pricey electronics particularly, most of which are troublesome to recycle or to dispose of responsibly, maybe it’s best to ask before giving, or to buy something else altogether. Marketers of electronic products won’t like to hear of that sort of attitude, but who cares what they think? Their only interest is in generating excitement about the latest developments in their products, and if that leads to multitudes of genuinely unnecessary purchases of new products and dumping in landfills of products only a few years old, well then that’s none of their concern as they see it. It’s nice to have good things that work well, and even nicer to understand that is enough.
— Techly