You Don’t Have to Do This

September 29, 2019 Techly DoRight
Shop for a new smartphone and the choice of operating system appears limited to Apple’s iOS or Google’s Android. The choice of wireless carrier network for the new smartphone is limited to five or six companies, and while there are more than a dozen smaller carriers, they all lease their networks from the larger carriers. Mergers of technology companies and globalization of supply chains have made it difficult for consumers to entertain enough options to simultaneously suit their desires for reasonable prices, efficient service, and in the best case scenario, ethical marketplace behavior.
To be a large player in the technology industry, as in many other industries, it seems engaging in horrible practices is simply a necessary cost of doing business. It’s as if economies of scale and ethical behavior are mutually exclusive. Apple iPhones are manufactured under terrible labor conditions in China, and the cobalt required for manufacture of those iPhones is mined using child labor in the Democratic Republic of Congo. Google, Facebook, and Twitter all sell their users’ information to advertisers while double-dipping by generating enormous ad revenues from the wide use of their services. That’s the cost of “free” to the users. As an online retailer, Amazon’s reputation for egregious labor practices is as bad or worse than that of its major brick and mortar competitor, Walmart. 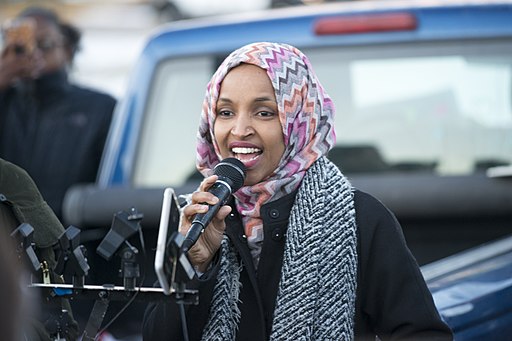 U.S. Representative Ilhan Omar (D-MN) speaking in December 2018 to about 200 workers protesting conditions at an Amazon workplace in Shakopee, Minnesota. Photo by Fibonacci Blue. Protests by workers in this country against unfair labor practices by giant companies like Amazon would get a slingshot-like boost if lawmakers would repeal the anti-union legislation passed in the last 50 years at the behest of corporations.
That is by no means a comprehensive list of all the technology companies with reputations for treating customers, workers, suppliers, or the environment badly. Just as Americans are becoming more concerned with what is in their food and how it’s produced, they can devote some time and attention to how their technology products are produced and how companies are using the personal information they hand over in the course of using their services. It may seem like there are few to no alternatives to some technology products and services, but there are alternatives, and it may require effort put into research to find out about them, and then some sacrifices as it turns out they don’t offer absolutely everything consumers are used to getting from Microsoft’s Windows operating system, for instance, or Facebook’s one-stop social media and news sharing platform.

Some people simply won’t care, of course, and will remain interested only in what’s easiest and most convenient for them. This is not for them. Others who are concerned about voting with their dollars, however, should know there are ways to find alternatives to signing on with the big technology companies, and that informing themselves doesn’t have to suck up an inordinate amount of their time and energy. Currently there is almost no labeling on technology products and services such as there is on food for sale in supermarkets, informing consumers of organic and non-GMO options, and of nutritional content. There should be similarly easily apparent labels for technology, listing ratings from an impartial source, if such is possible, on a company’s treatment of workers, suppliers, and the environment. The companies are now required by law to enumerate the ways they use customer information, but that is for the most part buried in fine print legalese that few consumers bother to read.

In episode #1938, “Theresa Syndrome”, from the radio show Car Talk, the portion of the show relevant to this post starts at the 10:45 mark with a call from Brian in Harrisonville, Kentucky. Questions of ethics come up every day in everyone’s lives, and in this case as in many others, arguments of efficiency that mask motives of self-interest are all too common.

Until the technology industry catches up with at least the halting steps the food industry has taken to inform consumers about what they are buying and what kind of ethical or unethical behavior they in turn support with their purchases, it will remain up to individual consumers to inform themselves. Globalization has made it easy to hide the ugly details of technology manufacturing halfway around the world. Out of sight, out of mind. It’s not as if things were far better 100 years ago, though, because at that time for most Americans a sweatshop on New York City’s Lower East Side was as much on the other side of the world as a sweatshop in Bangladesh is today. Speed of travel and communications have changed the seeming size of the world, but sadly not the willingness of businesses and governments to exploit the less fortunate, and of the more fortunate to turn a blind eye.
— Techly

Editor’s note: Bonus points to readers who note advertising on this site for the products of one of the companies criticized in this post. It’s hard, maybe impossible, to exist in the modern world without some compromises, and like everybody else, writers have to eat. With a little effort and attentiveness, people do what they can to make the world a better place, but no one is without faults, and as Joe E. Brown said at the end of the movie Some Like It Hot, “Well, nobody’s perfect.”