September 19, 2019 Editor
“Aggrieved entitlement” is a term almost exclusively applicable to white, American men because it takes note of the historically high levels of privilege of that demographic relative to the rest of society, and how as the less privileged have demanded equal treatment some white, entitled American men feel an erosion of their privilege. They feel “aggrieved” about the situation particularly because they think their loss of privilege is unjustified. A less charitable way of describing how they feel is to call them self-pitying and selfish. 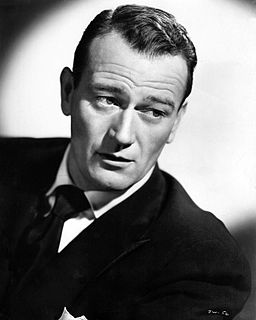 A 1952 publicity photo of John Wayne (1907-1979), the actor whose image represented for many throughout the middle of the 20th century the ideal of American manhood, and who is even now still revered by some.
There is good reason to feel uncharitable toward a segment of society when its most extreme members act out their anger and frustrations by shooting and killing other human beings, sometimes on a massive scale. A disproportionate number of mass shooters are angry white men. After every mass shooting, there are calls for tighter gun control and for better mental health evaluations and treatments. Those are measures worth acting upon, if government leaders can ever muster the political will and courage to pass significant legislation and allocate sufficient resources to support them.
The largest element underlying gun violence goes unaddressed, however, and that is the sickness of this society. This is a society that values athletes more highly than teachers, and rewards cutthroat capitalists with outsized political power and immunity from customary ethical standards of doing business with the public and cooperating with workers and government. This is a society that puts cartoonish displays of machismo in its popular entertainment and then exalts them as models of the male ideal. This is a society where the term “toxic masculinity” has become necessary to describe behavior we unfortunately have come to witness every day.
The Searchers was a 1956 western film directed by John Ford and starring John Wayne.
Until the society as a whole works to correct the conditions nurturing the ideas some white men have that the possession, worship, and ultimately homicidal use of guns is the best way to make themselves feel better, then mass shootings are likely to keep occurring. These men deserve our empathy, or understanding, so that we can more effectively pinpoint and effect societal remedies. They do not deserve our sympathy, or sorriness, for how they feel about their changing circumstances. Just as the majority of children who come from broken homes do not grow up to become criminals, only a very few white men are so wrapped up in their sense of aggrieved entitlement that they lash out violently. Everyone has problems; most people find peaceful, constructive ways to cope with them.

Robert De Niro as Travis Bickle, the warped character at the center of Martin Scorsese’s 1976 film Taxi Driver. The story is told from Bickle’s perspective, which helps the audience have empathy for him. It’s up to individual audience members to decide if they feel sympathy for him. Warning: foul language.

For every action there is an equal and opposite reaction, a physical law first stated by Isaac Newton, and it seems it applies to forces within society as well. As women and non-white ethnic groups have fought for equal rights over the past 100 years or so, there has been an opposite reaction from men and white people, though not all of them in equal measure. As women have gained power in the marketplace and in the home, we have unfortunately seen the coining of terms like “man up”. As non-white ethnic groups have expressed their growing power in increasing numbers at the ballot box, we have begun to hear the phrase “take back our country” from some in the white majority who feel threatened by slippage in their dominant status. If meanness of spirit can be learned, then generosity of spirit can be taught, and society should emphasize the value in it. More Tom Joad, less Rambo.
— Ed.