July 14, 2019 Vita Historia
“He who passively accepts evil is as much involved in it as he who helps to perpetrate it. He who accepts evil without protesting against it is really cooperating with it.”
— Martin Luther King, Jr. (1929-1968)

It’s been 154 years since the Civil War ended and still Southern white supremacists expect everyone else in the country to walk on eggshells around them so as not to upset their mythology or the chips on their shoulders. Yesterday, July 13, was Nathan Bedford Forrest Day in Tennessee, a holiday there since 1931, when it seemed like a good idea to commemorate a Confederate general who murdered captive black Union soldiers during the war, and after it became the first national leader of the Ku Klux Klan (KKK). Now it’s 2019, and Tennessee Governor Bill Lee‘s lame excuse for continuing the practice is that it is what’s expected of him under the law, even though he could push to have the law changed if he had the political will and courage.

All this hiding behind the disingenuous mantra of “heritage, not hate” is for the purpose of upholding monuments to and celebrations of Confederate leaders whose actions and beliefs, however much they deluded themselves and others in their own times into feeling were noble and righteous, have in the past 154 years proven to be in the service of one overriding principle – white supremacy. Dress up evil however you want, turn somersaults in logic if you like – in the end it’s still evil. Once state and local governments withdraw their sponsorship of these Confederate monuments and celebrations, individuals are still free to honor them in private if they are so inclined. No one is infringing their First Amendment free speech rights in speaking out on behalf of their Confederate idols in the public square; it’s just that everyone else no longer has to be subject to the constant looming presence of publicly sponsored monuments and celebrations reminding them to know their place, particularly if they are the descendants of slaves. 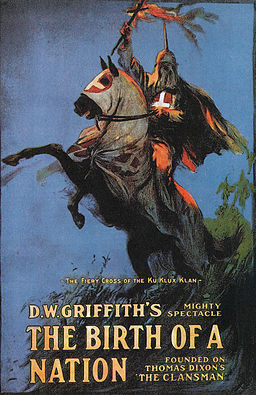 Theater poster for the 1915 D.W. Griffith film The Birth of a Nation. The movie glorified the KKK and set the stage for the organization’s resurgence shortly afterward.
In the past two and a half years, because of the tone set by the White Supremacist-in-Chief occupying the Oval Office (proving not all white supremacists are Southerners, by any means), more awful people have crept from the shadows into the light than many decent people were aware existed. As the specter of awful behavior grows, it is not enough for decent people to shun it and the awful people who afflict society with their malevolent derangement; decent people need to confront it, preferably without violence, but by speaking out forcefully and often in public, because otherwise a bully will always take silence to mean assent, even approval.

A clip from an August 2017 episode of The Late Show with Stephen Colbert which aired shortly after the Unite the Right rally in Charlottesville, Virginia.

After a generation has passed, will we erect monuments to the malignant culture that has grown within Immigration and Customs Enforcement (ICE) and the Border Patrol? Will we celebrate the concentration camps for brown-skinned immigrants at “detention sites” from Texas to California and elsewhere around the country? Stopping the cancerous growth of white supremacy will require more decent white people standing up to it and saying “enough already”, an outspoken attitude of noble and righteous indignation that is long past overdue, as evidenced by a state still celebrating in 2019 the hateful heritage of Nathan Bedford Forrest.
— Vita