April 30, 2019 Isidore Gnome
Gardeners may have heard it’s best to use odd numbers of similar plants in groupings and wondered why odd numbers are supposed to be more aesthetically pleasing than even numbers. Perhaps some authoritative figure in garden design plucked that rule out of the air and everyone has followed it blindly ever since. The rule doesn’t apply in situations where pairs work best, such as one columnar arbor vitae on each side of an entrance. A gardener would have to be daft to try to force another arbor vitae in there somewhere in order to obey the odd number rule, disrupting the natural harmony of pairs at entrances, gates, and arbors, where the architectural feature itself presents a third, central element. 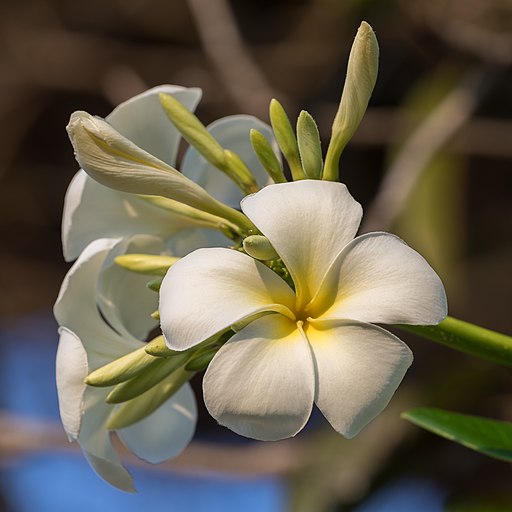 Plumeria (frangipani) flowers in Don Tao, Si Phan Don, Laos. Photo by Basile Morin. Humans and other animals often present paired symmetries of even numbers, while plants more often than not have odd numbers of parts, as in the five petals of these frangipani flowers.

No one seems to know for sure why odd numbers in plant groupings are more pleasing, at least in an informal garden. Informality could be the key, since some people find the formality of even numbered groupings pleasing, but that appreciation doesn’t appear to come naturally to our brains, which look for a central focus in a grouping, something that presents itself naturally in odd numbered groupings. More than seven plants in a grouping starts to lose coherence and people can only vaguely get an idea of the center, rather than zeroing in on a central plant.

In a 2008 appearance on Sesame Street, Feist sings her song “1234” with help from groups of Muppets. Four is of course an even number, but you may note as you enjoy the music whether the presence of Feist herself changes the dynamic from even to odd groupings, dissimilar as she is to a Muppet. There’s certainly nothing stiff or formal about the presentation.

Experiment with different numbered groupings of similar shrubs, perennials, or annuals, and you will most likely find that without thinking about it you find odd numbers more pleasing and natural if you prefer a less formal garden, and even numbers naturally create a more formal feeling. These are arrangements nature appears to have adopted, like golden section proportions and Fibonacci spirals. The patterns most prevalent in nature seem to bypass our reason and appeal directly to our core because it’s what we are immersed in from birth, and that still begs the question of why nature prefers some patterns over others. Efficiency? Possibly that’s a part of it. Beyond that is a mystery, like the appeal of music. Many observable patterns are essentially visual representations of music, and we enjoy them because we typically enjoy harmony. When gardening, it helps to listen as well as look.
— Izzy