April 26, 2019 Vita Historia
Morality with an asterisk differs from hypocrisy in that people engaging in it apply double standards to third parties, and not necessarily to themselves. For instance, when the Reverend Franklin Graham recently called on Democratic presidential candidate and South Bend, Indiana, Mayor Pete Buttigieg to repent for his homosexuality, which the Rev. Graham claims is a sin according to the Bible, he appears to have ignored sinning on the part of his favored politician, the current president, who numbers serial adultery among his transgressions. That is asterisk morality.
Overlooking sin or defective character when it comes from a political favorite is nothing new for the Rev. Graham, his late father, or white evangelical Christians generally. They do not apply the same standards of forgiveness to their political opponents. When their politician stands accused of misdeeds in the forum of public opinion, the charges are fictional, a smear; but when they have the slightest opportunity, white evangelical Christians do not hesitate smear their political opponents, usually citing the Bible. Where is that Bible when examining the character of Their Guy (almost always a man, and certainly an avowed heterosexual man)? That is asterisk morality. 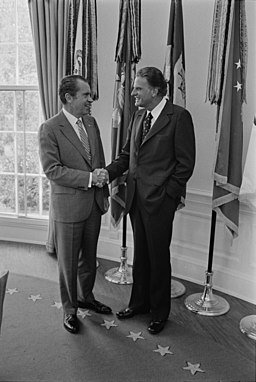 President Richard Nixon in the Oval Office with the Reverend Billy Graham, father of Franklin Graham, on August 10, 1971. Hobnobbing with presidents who perceive themselves as above the law appears to be a family tradition. Photo from the National Archives.
It would be interesting to see if the Rev. Graham might withhold criticism of Mr. Buttigieg’s personal life if their political views aligned. In reference to the character of the current president, the Rev. Graham appears to have no publicly stated misgivings, and is enthusiastic about him in every respect. All this politicking by the Rev. Graham and other white evangelical Christians is clearly in violation of the 1954 Johnson Amendment to the United States tax code, which was intended to restrict the ability of tax exempt organizations such as churches to engage in partisan politics. It has been laxly enforced. The current president has pledged to abolish the Johnson Amendment. Maybe if Mr. Buttigieg did the same, he too could be without sin* in the eyes of the Rev. Graham and his flock.
— Vita

* As long as he advocates political policies favored by white evangelical Christians. Amen.