August 6, 2017 Editor
“Render therefore unto Caesar the things which are Caesar’s; and unto God the things that are God’s.”
― Jesus Christ, quoted in Matthew 22:21 (King James Version).

“Congress shall make no law respecting an establishment of religion, or prohibiting the free exercise thereof . . . “
― excerpt from the First Amendment to the United States Constitution.

The two quotes above seem straightforward in their meaning, even if some people with self-serving agendas insist there is room for interpretation in both. Some religious groups, but by no means the majority, chafe at the straightforward interpretations and would rather see the federal government allow them to get involved in partisan politics while maintaining their tax exempt status. They applaud any effort to roll back enforcement of the Johnson Amendment to the Internal Revenue Service (IRS) code, which forbids charitable or non-profit organizations with tax exemptions from directly endorsing political candidates. In May, the current president signed an executive order relaxing those restrictions, essentially directing the IRS to use discretion in enforcing the Johnson Amendment. Since the law would have to be changed by Congress, court challenges to the executive order will probably crop up, though none have as of yet.

The simple solution for religious groups who want to submerge themselves in the American political process is to forgo tax exempt status. That appears not to be an option they care to consider. They want their cake, and to eat it, too. The Johnson Amendment, added to the IRS code in 1954 by Lyndon Johnson, at the time a Democratic senator from Texas, has always been laxly enforced by the IRS, revoking the tax exemptions of only the most egregious violators. That’s not good enough for some people. They want the wall separating church and state torn down. 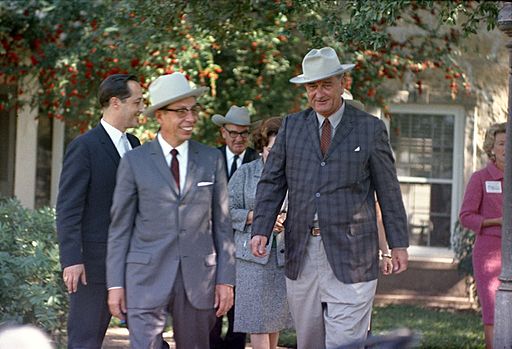 President Lyndon B. Johnson hosts the President of Mexico, Gustavo Diaz Ordaz, at his Texas Ranch in 1964; photo by Yoichi Okamoto.
But not necessarily torn down completely. Muslims, in the view of the Christian Right, should probably not be included in a law respecting an establishment of religion by allowing them to funnel their congregants’ money to chosen political leaders, just like their Christian counterparts. Not so sure about the Jews, either. Catholics? We’ll have to think about that one. Once we start making exemptions for the exemption, we have to decide who gets it and who doesn’t. What would Jerry Falwell do? His son, Jerry Falwell, Jr., Liberty University President and leader of the evangelical Christian Right, believes the Johnson Amendment has to go because it infringes on the free speech rights of religious leaders.

In this scene from the 1980 film Caddyshack, Bishop Pickerling, played by Henry Wilcoxon, plays golf during a thunderstorm, with groundskeeper Carl Spackler, played by Bill Murray, serving as his caddy. The Bishop exercises his free speech rights at the end, with consequences. Note that the music quotes the score from the 1956 version of The Ten Commandments.

That argument ignores the reality of religious leaders already expressing themselves freely, just not being allowed to funnel money to candidates while maintaining their own tax exempt status. What religious leaders like Jerry Falwell, Jr., really appear to mean is that the Johnson Amendment is an infringement on their free speech rights in the sense that was addressed by the Supreme Court in the 2010 Citizens United decision, which found that the Federal Elections Commission (FEC) was violating the free speech rights of corporations, both for profit and non-profit, when they limited campaign contributions. Money talks. Now some religious groups, such as Mr. Falwell’s, want the same kind of special dispensation, while also maintaining their exemption from paying taxes. That’s called the Sweet Deal!

George Carlin, a man who really did “tell it like it is”, in a bit from his 1988 performance What Am I Doing in New Jersey? Warning: foul language.

For the week beginning August 21, Americans United for Separation of Church and State is organizing what they call Hometown Congressional Visits to express support for the Johnson Amendment. This is a country of many faiths and to allow one vocal minority – regardless of it’s billing of itself as “The Moral Majority” – to usurp the voices of the many would be not only wrong now, but unconstitutional from the founding of the republic.
― Ed.