March 22, 2019 Techly DoRight
The recent revelation that Lin Bennett, a Republican State Representative in South Carolina, subscribes to the QAnon internet conspiracy theory, means the followers of the QAnon cult surrounding the current president have another friend in a powerful position openly siding with them. Validation like that keeps the embers smoldering while the QAnon cult followers await prophesied heroics from their leader in the Oval Office. It’s all fun and games until some deluded idiot with access to weaponry takes it all too seriously and acts out self-righteously, as a fellow from North Carolina did in reaction to the Pizzagate conspiracy in December 2016.
With so much factual information available on the internet, it’s hard to understand how people can continue deluding themselves with conspiracy theories that common sense would see fall apart after the application of a few facts. A lack of common sense and a capacity for self-delusion are the very traits preventing some people from seeing the foolishness behind many conspiracy theories. For those people, the great amount of information available on the internet supports their pet theories even when the information is not in their favor. They do not lack for information concerning their theories, for or against. Where they fall short is in the self-confidence to accept and honestly examine divergent information, because to do so might undermine the fragile construct of their self-worth bound up in the things bigger than themselves they have lashed themselves to stay afloat in a world to their minds uncertain and threatening, the cult and the conspiracy. 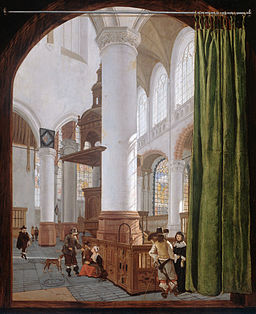 Interior of the Old Church in Delft, a 1654 trompe-l’œil painting by Gerard Houckgeest (circa 1600-1661). Are the drapes real, or are they part of the painting?
People in prominent positions, like State Representative Bennett, are irresponsible to publicly endorse nonsense like QAnon, because of the loons who are more likely than ever to act out in light of her endorsement. Some conspiracy theories, like the Flat Earth one, are relatively harmless, and if Rep. Bennett had come out as a Flat Earther the majority of Americans would probably have shrugged and considered her nutty, maybe a little too nutty to be entrusted with public office, but otherwise nothing to worry about since it was unlikely her outlandish belief would have any effect on public policy or discourse. QAnon theorists are different because they advocate smearing, imprisonment, and summary execution of their opponents. It’s as bad as if Rep. Bennett had declared herself a member in good standing with the Ku Klux Klan.

What is real and what is illusion? One of the questions examined in The Manchurian Candidate, a 1962 film directed by John Frankenheimer and starring Frank Sinatra and Laurence Harvey.

QAnon arose and spread entirely over the internet; there was no broad based movement addressing needs in the real world, with people openly discussing its tenets, adopting some and rejecting others. A few trolls threw up some outlandish claims on internet message boards and some of them stuck, not because they were true and promised to solve real problems, but because other people wanted them to be true and hoped they would solve their imaginary problems born of hate for the Other and their own self-loathing. But for responsible adults those are really nothing more than excuses. With more information available than ever before in history, remaining bigoted and ignorant is a conscious choice of chip-on-the-shoulder anti-intellectualism, and such people need to be held accountable for their vile behavior, the better to keep them in check before they act out violently on their delusions.
— Techly