March 19, 2019 Vita Historia
Customs and Border Protection (CBP) employees have been detaining journalists and immigration lawyers at checkpoints in Arizona and Texas and questioning them about their political beliefs. These are nothing more than intimidation tactics by government employees who don’t appear overly concerned that they work for all citizens of the United States, not merely the current presidential administration and its far right supporters.
CBP has long had too broad an authority, and particularly after World War II when Congress passed laws giving the agency the ability to regularly trespass on citizens’ rights under the Fourth Amendment to the Constitution. In 1953, without public review, the Justice Department specified the zone within which CBP could operate fast and loose with the Constitution at 100 air miles of the United States border. That’s 100 miles within the United States, all around the perimeter, an area encompassing nearly two thirds of the populace. 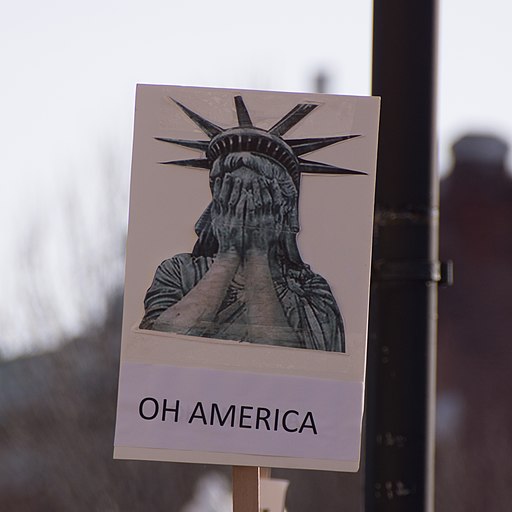 A sign at the January 2018 Womens’ March in Seneca Falls, New York. Photo by Marc Nozell.
It’s incredible these laws and rules have stayed on the books as long as they have and have withstood review by the Supreme Court. The Supreme Court has often interpreted the Constitution with an eye toward sustaining the power of the government over the citizen, however, despite the recent miraculous lapse in its ruling on Timbs v. Indiana, which rescinded civil asset forfeiture, also known as cops’ legalized stealing of citizens’ property. That ruling can best be considered an anomaly, at least from the Court’s five conservative justices, who with an even more recent ruling, in Nielsen v. Preap, are back to their usual shoring up of police state encroachments on the Constitution.

George Carlin performing in 2008 in Santa Rosa, California, just months before he died. “You Have No Rights” is the closing bit, and for the album made from this Home Box Office (HBO) special, It’s Bad for Ya, he was awarded a posthumous Grammy. Warning: foul language.

Supposedly these laws are meant to be enforced against illegal immigrants, who after all are not citizens. In practice, their overly broad authority allows enough room for CBP employees with a political agenda to harass and intimidate anyone they care to, citizens and non-citizens alike. The CBP employees can always claim some legal rationale for their capricious actions, and even after offering the flimsiest excuses, they know legal redress of their abuse of power will take years, if it comes at all. This is what happens when fear guides the writing of laws, giving too much authority to law enforcement agencies, and then a lawless presidential administration grasps the reins of all that power. Meanwhile the nation’s courts have too often upheld police prerogatives over citizens’ rights, eroding the meaning of those rights and mocking their supposed inviolability.
— Vita