February 24, 2019 Techly DoRight
“Excessive bail shall not be required, nor excessive fines imposed, nor cruel and unusual punishments inflicted.”
— Eighth Amendment to the United States Constitution.

In a unanimous decision on February 20, the Supreme Court ruled against the state of Indiana in the case of Timbs v. Indiana, a ruling which effectively ends the notorious practice of civil asset forfeiture. The applicable clause in the Constitution is “nor excessive fines imposed”, and it’s a wonder the states have been able to get away with lawless civil asset forfeiture practices as long as they have, considering the clause seems plainly clear. Apparently the application of that particular right slipped through as long as it has because the country’s founders meant the Constitution to apply only to the federal government. The Supreme Court has been gradually redressing that error ever since, and on February 20 the Court closed the loophole by which police departments across the country had been stealing citizens’ property under state laws allowing the practice. 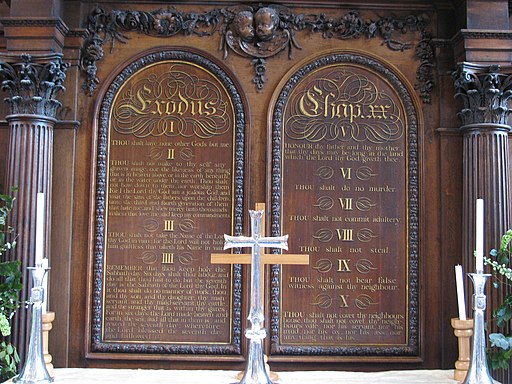 The altar screen of the Temple Church in London, setting out the text of the Ten Commandments according to the 1549 Book of Common Prayer. Photo by Jheald.
What’s most remarkable about this historic ruling is that it was unanimous. The Supreme Court’s balance is now five to four in favor of conservative justices, and typically when conservatives weigh law enforcement practices against the rights of citizens they have decided for the former. Considering what was at stake in this case, the miraculously unanimous decision speaks to just how corrupt policing for profit had become, and ending it slows the nation’s slide toward becoming a police state. Now police employees nationwide have to heed the Eighth Amendment to the Constitution as well as the Eighth Commandment which, carved in stone in Judeo-Christian culture, reads “Thou shalt not steal”.
They can make more progress by heeding other Commandments, too, such as the Sixth, a paraphrase of which states “Thou shalt not wantonly kill, and then have thy buddies on the force close ranks and cover it up for thee”. That last bit incorporates the Ninth Commandment against bearing false witness, saving time. What does all this have to do with technology? If the police can finally be made to start following rules that have been set in low-tech stone for millennia, perhaps moving along to rules for 21st century high-tech will follow, like whether the controversial practice of going on fishing expeditions to obtain DNA evidence violates citizens’ rights under the Fourth and Fifth Amendments to the Constitution. There are no equivalent strictures in the Ten Commandments. Perhaps the usual advocates on the Court for the police, the conservative justices, can rely on the Constitution alone and apply its plain as day language to the latest technology and once again vote unanimously for citizens’ rights.
— Techly