January 13, 2019 Editor
Last week there were reports in astronomy news of the detection of anomalous fast radio bursts from another galaxy for only the second time ever. That doesn’t necessarily mean the bursts have happened only two times in the history of humanity, merely that it was the second time humanity has detected them. Astronomers have no explanation for the source of the bursts, only conjectures, among them the possibility of intelligent origin. 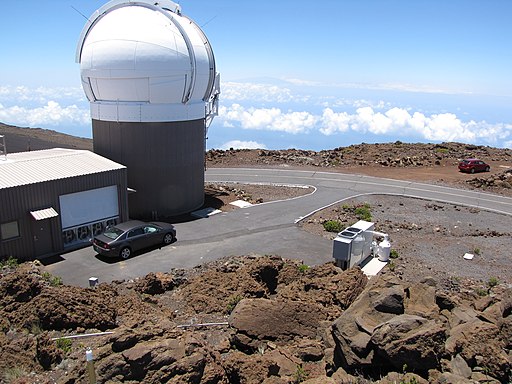 The Pan-STARRS (Panoramic Survey Telescope and Rapid Response System) Observatory atop Mount Haleakala on the island of Maui, Hawaii, where astronomers first observed and then named the interstellar object, Oumuamua. Photo by Forest and Kim Starr.
Intelligent origin of unexplained phenomena can never be ruled out until it is, of course, otherwise explained. All the same, there are likely and less likely explanations based on experience. The scientific method narrows down the possibilities, and it saves time, money, and energy to investigate the most likely possibilities first, rather than looking into unusual ones. Is a tuft of hair snagged on a tree branch from a bear or from Bigfoot? Everyone already knows of bears, while the existence of Bigfoot remains the source of speculation. It makes more sense for an investigator to analyze the tuft of hair to see if it came from a bear than it does to try linking it to a being for which there is no other physical evidence, and then to move on from there.
Likewise the investigation of interstellar anomalies. For now, astronomers could attribute the fast radio bursts to an extraterrestrial intelligence, but since any evidence for the existence of such intelligence remains in dispute, astronomers will no doubt look into purely natural sources first. A case in point was the appearance in the solar system in 2017 of the interstellar object Oumuamua, a Hawaiian word meaning “first messenger”, given it because a University of Hawaii observatory discovered the object and astronomers conjectured it was the first interstellar object observed by humanity to transit the solar system.

News reports latched onto musings by some astronomers that the object could be a scout sent ahead by an extraterrestrial civilization. Certainly it could have been that, and the object’s unusual size and behavior as it moved through space prompted the astronomers’ musings. But the conjecture was never more than an aside in otherwise sober scientific report. It was interesting speculation which was ultimately debunked by observation of Oumuamua when it came nearer the inner solar system before leaving the neighborhood in 2018.

It is still best to keep an open mind to the possibility of extraterrestrial intelligence either broadcasting a signal of its existence or taking notice of the Earth and investigating. It goes without saying that the universe is a such a vast place that it would be folly to think life exists only on this one planet. The intelligence of some of the life on Earth remains open to interpretation. The Hawaiians lived on the most isolated archipelago on the planet, and yet one day in 1778 two strange ships appeared over the horizon of the vast ocean surrounding their home islands and the Englishmen aboard those ships, led by Captain James Cook, changed their lives forever, and in many ways not for the better.

People have only their own experience by which to judge how a first contact with an extraterrestrial intelligence might develop; anything else is conjecture about less likely outcomes, like guessing whether Bigfoot might prefer classical music over hip-hop. Is there anything in the human experience to suggest that first contact of a less technologically advanced civilization with a previously unknown, more powerful civilization would be anything but traumatic for the former? And considering that humanity is still taking baby steps toward the stars, it is perhaps wise to guess a first contact at this point would put Earth’s people at a disadvantage. There is no evidence on which to base the conjecture that more advanced civilizations would also be more benevolent than we ourselves have been in dealing with the less powerful. Experience of people on Earth with each other suggests otherwise.

An illustration of Robinson Crusoe by N.C. Wyeth (1882-1945) for a 1920 edition of Daniel Defoe’s classic fictional tale of a sailor marooned on an island off South America. Crusoe has the island to himself and yearns for human company, yet when he encounters the primitive man whose footprints Crusoe discovers unexpectedly in the beach sand, he abuses his greater power in order to enslave the man.
The Hawaiians living in splendid isolation in 1778 did not have the advantage of being able to see farther than their own eyes could see. It’s ironic that partly because of the isolation of the islands they make nearly ideal posts for astronomical observatories which can see light years into interstellar space. It seems nothing can stop progress, however, whether good or bad. Even if the Hawaiians had seen Cook’s ships coming from farther off than the horizon, they could not have stopped them. At most they could have prepared themselves for the inevitable, if such a thing is possible. It’s highly unlikely they would have signaled the ships since it appears the Hawaiians were generally content and had no need of strangers. Some people on Earth feel differently about the situation now after humans have fouled the nest, but still it is perhaps best not to look abroad for saviors since their good intentions are not assured, and instead limit ourselves to quiet observation and keeping a low profile while gathering evidence. In the meantime, we had best act as our own saviors here on Earth, imperfect as we are, or future generations will condemn our stargazing as a fool’s errand.
— Ed.