January 8, 2019 Isidore Gnome
Vegetarian or vegan substitutes for meat are not necessarily aimed at people who don’t eat meat, but rather at those who do, because by getting those people to eat less meat the environment will benefit, the animals being raised for meat will certainly benefit, and the meat eaters themselves will be healthier. The problem has been in developing a suitable substitute for meat at a reasonable cost and without creating a Frankenmeat with all sorts of nightmarish unintended consequences. Reading the reviews coming from the latest Consumer Electronics Show (CES) in Las Vegas, Nevada, it appears the company founded by Stanford University biochemistry professor Patrick O. Brown, Impossible Foods Inc., has gotten the formula right with the latest iteration of their Impossible Burger.
Other meat substitutes, such as the Boca Burger, have been geared toward vegetarians who wanted to retain some of the meat eating experience, and they were and are pathetic imitations. Attending a backyard cookout where everyone else was eating real beef burgers and then making do oneself with a Boca Burger or equivalent was an experience similar to being relegated to the kids’ table, with miniature versions of the adults’ dinnerware. Why bother? There are a multitude of vegetarian and vegan recipes available for real dishes, making it unnecessary to have to settle for dry, grasping imitations of what the grown-ups are eating. 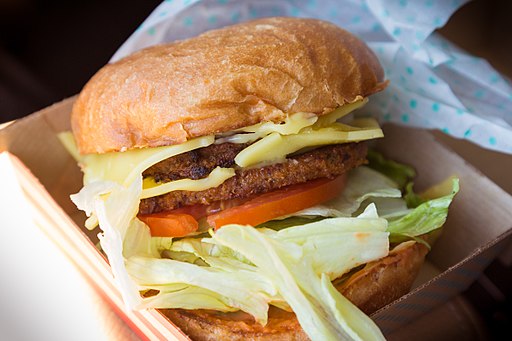 The vegan Amy Burger at Amy’s Drive-Thru in Rohnert Park, California. Photo by Tony Webster. Amy’s Kitchen started in 1987 making organic and vegetarian frozen and convenience foods for sale in supermarkets around the country, and in 2105 opened the Rohnert Park restaurant, their first.
The point of the Impossible Burger is not to satisfy vegetarians or vegans who miss eating meat, but to replace meat in the much larger percentage of the population who are committed carnivores. Those people might have tried one of the previous meat substitutes out of curiosity, and they were right to scorn them as alternatives they could never embrace and still satisfy their nutritional and taste requirements for meat as well as a more nebulous, deep psychological need satisfied by eating meat. Professor Brown and his Impossible Foods colleagues intend their meat substitute to fulfill all those needs, and apparently they are well on their way to succeeding.

Replacing meat in the diet of the world’s people is enormously important, and probably the biggest single step toward ameliorating climate change other than reducing fossil fuel use, which would incidentally also be a byproduct of reducing livestock farming. Animal suffering would also be greatly relieved, because the situation now is horrific and getting worse as Americans and other Western peoples eat meat at least once a day, and in some places for every meal, and hundreds of millions people more in China and India aspire to the same relatively affluent lifestyles of Westerners. Factory farming of animals will become a larger industry still as the demand for meat goes up worldwide.

A scene from the 2002 film My Big Fat Greek Wedding, directed by Joel Zwick and written by Nia Vardalos, who also portrays the bride, with John Corbett as the groom. Eating meat is such an ingrained part of personal identity and social custom that most people give it little thought. Anyone who has ever been vegetarian or vegan, however, soon becomes aware of how others react to that news with bafflement or acceptance or, oddly, hostility, because refusal to eat meat is to such people a repudiation of their hospitality and identity, and possibly an indictment of their morality if the chief reason for not eating meat is because of animal suffering or the environment. It’s interesting that often the best way to smooth the ruffled feathers of meat eaters upset over learning of a vegetarian or vegan in their midst is to tout the health benefits of giving up meat, a reason that will usually gain their understanding and assent.

Consumers want more meat even though it’s not healthy for them. People will also eat more sugar than is good for them if they have the money and the opportunity. These are desires hard wired into human beings, and while some people can overcome them through will power however gained, most cannot, or even have a desire to try. For those people, the majority, give them a meat substitute at a comparable price to real meat, and satisfy their other needs for taste and nutrition and the most difficult need of all, but probably the most crucial, the carnivorous kernel in the brain that is the cause of all the social customs around eating meat or not eating meat, give those people that and the climate and the environment will be better for it, the animals all around the earth will be better for it, and those meat eaters themselves will be better for it, whether they understand and acknowledge it or not.
— Izzy