December 28, 2018 Isidore Gnome
When Charles Dickens wrote A Christmas Carol and had it published in 1843, the Christmas goose was a traditional feast, and turkey was an uncommon replacement. Goose was relatively inexpensive and plentiful, and turkey was quite the opposite in Europe at least, where it was not native. After Scrooge, the rich man, has metamorphosed into a warm, charitable human being, he makes a gift of a turkey to the family of his clerk, Tom Cratchit. At the time, a gift of a turkey for Christmas dinner was considered quite an upgrade over goose. 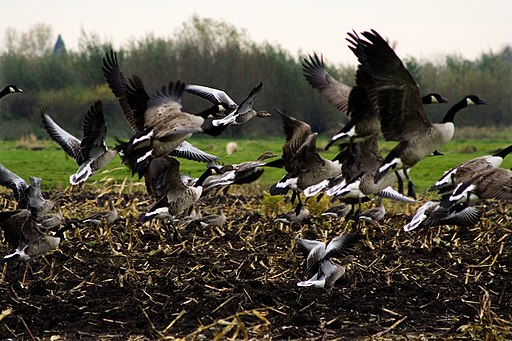 A mixed Greylag and Canada geese flock in a farm field in The Netherlands in February 2011. Photo by Uwactieve. During winter, geese often feed in farmers’ fields, gleaning grain fallen among the stubble of the harvest.
Now the tables have turned, so to speak. Turkeys raised on factory farms have become cheap to buy for Thanksgiving and Christmas dinners, but since they have been bred for size and other characteristics, such as being able to withstand close quarters, flavor has been lost in the breeding. Roast goose, meanwhile, has been largely neglected in Western culture over the past 100 years. At the same time, Canada goose (Branta canadensis) numbers have exploded, to the point they are now nuisances in many urban and suburban areas across North America and even western Europe, where they have been both introduced by people and settled by way of natural migration in the past several centuries.
Canada goose populations have followed a curve similar to that of white-tailed deer (Odocoileus virginianus), another once common North American animal that European settlers hunted to such low numbers by the early twentieth century that conservationists took measures to curtail hunting and preserve and protect both species. From that low point in the early twentieth century, Canada geese and white-tailed deer have rebounded to numbers higher perhaps than they were before Europeans migrated to North America. Both species have adapted so well to modern urban and suburban development, liking and even preferring some human-made habitats over undeveloped country, that many people now consider them pests, and even expanded hunting seasons cannot keep up with controlling their booming numbers. 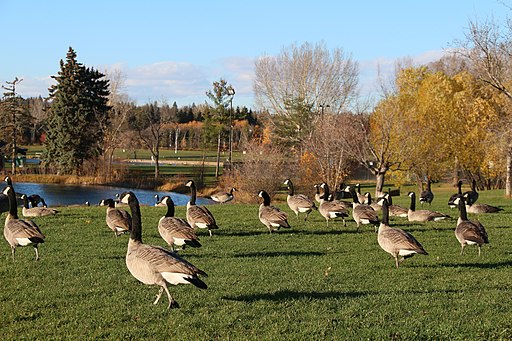 Canada geese have found well-tended parks and golf courses with water features to be ideal habitats year round, making long migrations unnecessary. Photo by Marta Boroń.
Some municipalities in North America hire hunters to cull Canada geese and white-tailed deer, donating the meat to food banks. It’s an interesting development that in 150 years goose has once again become the roast meat at the center of holiday dinners for some poor folks like the Cratchits. They are perhaps eating some of the same Canada geese that have been pestering the rich folks on their golf courses, though naturally the municipalities paying to cull geese to help feed the poor would only do so on public lands, such as public golf courses and parks, and not on privately owned golf courses, since everyone knows rich people don’t believe in government assistance for anyone but themselves.
— Izzy