December 25, 2018 Techly DoRight
At Christmas time, the imperative phrase “charge it!” can mean one of two things: either buying a gift on credit, or making sure a battery powered gift is ready to go once the recipient unwraps it. Buying on credit has never been the best idea and can be a sign of financial distress, while using batteries to power toys and electronic devices of all sorts has gotten better over the years, with battery technology currently poised for another great leap forward. 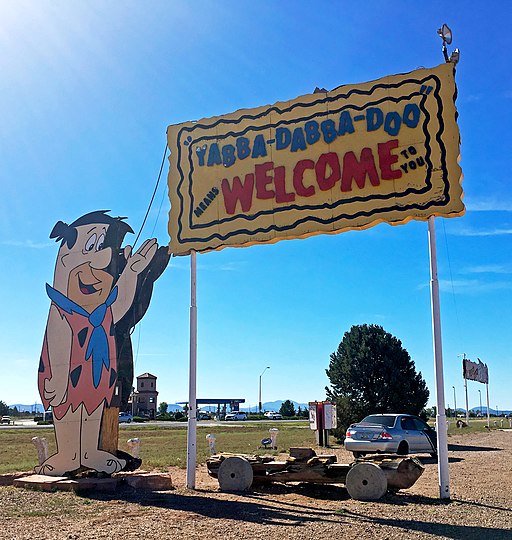 Flintstones Bedrock City in Williams, Arizona, in September 2018. Photo by Don McCulley. That appears to be a stripped down version of the Flintstones’ human – or cartoon character – powered vehicle under the sign.
The need for batteries on Christmas morning made itself known in earnest after World War II, when the first battery powered toys arrived on the market. Those batteries were not rechargeable and lasted only a few hours at most before depleting and then becoming trash. No recharging, no recycling. The batteries themselves might have been relatively inexpensive, but replacing them time and again was not.
Now batteries are mostly rechargeable and mostly recyclable, and more importantly they have become vital to powering far more devices than toys, from communication devices almost everyone uses throughout each day of their lives to personal transportation that is moving toward similar ubiquity. And batteries play a big part in storing electricity generated by renewable sources such as wind and solar, and that electricity can in turn be used to recharge the batteries people use every day. 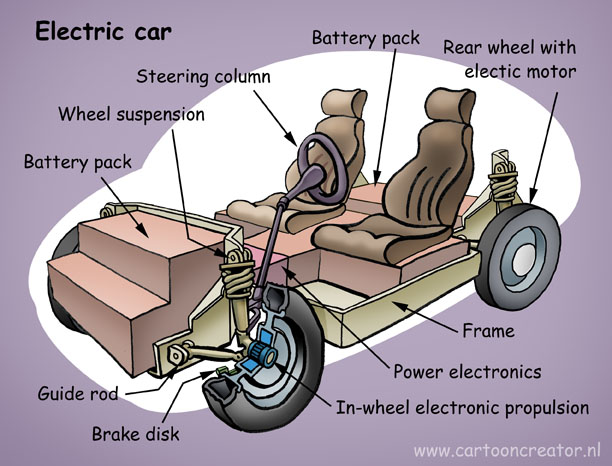 A cartoonish look at the works of an electric car. Illustration by Welleman.
All that burgeoning interest has attracted research and development dollars, the incentive being the production of batteries that run longer on a charge, are made of less toxic materials, are cheaper for consumers, and are lighter in weight and in environmental footprint. The race is on, and with many more things in everyone’s daily lives being powered by batteries than there were 70 years ago, the stakes are bigger than simply making toy cars go faster on Christmas morning.
— Techly