November 18, 2018 Techly DoRight
Amazon.com, the internet’s everything store, recently announced it will be opening two secondary headquarters, one in the New York City borough of Queens, and the other in the Arlington, Virginia, area near Washington, D.C.. City and state officials in both locations offered Amazon enormous benefits at taxpayers’ expense, though the exact amounts are unknown because officials claim they have a competitive advantage by keeping their bids secret.
Nonsense. It’s the taxpayers’ money and they have every right to know how officials spend it. The whole nationwide competition for Amazon’s secondary headquarters was a yearlong sham and circus, the kind of municipal debasement and looting that has become far too common as states and cities are pitted against each other for the dubious prize bestowed on them by corporate behemoths relocating or opening new places of business. 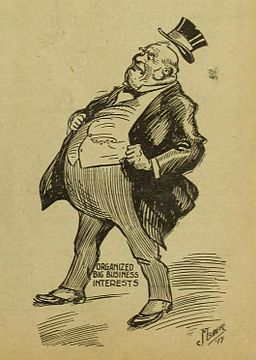 Caricature of “Organized Big Business Interests” illustrated by John Miller Baer (1886-1970) for part of the November 17, 1919 cover of The Nonpartisan Leader. Nearly one hundred years later, a caricature of a big business interest is more likely to appear trim and fit, wearing jeans and a turtleneck or other informal clothing.
Amazon is to labor practices and corporate citizenship as an internet business as Walmart is to labor practices and corporate citizenship among brick and mortar stores, which is to say they are leaders in their respective fields in abusing their lowest tier workers and siphoning funds away from local communities. Both Jeff Bezos, head of Amazon, and the Walton family at the head of Walmart are obscenely rich. They got that way because of their cleverness at exploiting the properties mentioned above, not because of their own virtuousness and hard work as they would have everyone believe. There are millions upon millions of people who are every bit as virtuous and hard working as Mr. Bezos and the Walton family, probably more so, and they are not obscenely rich, or even well off. 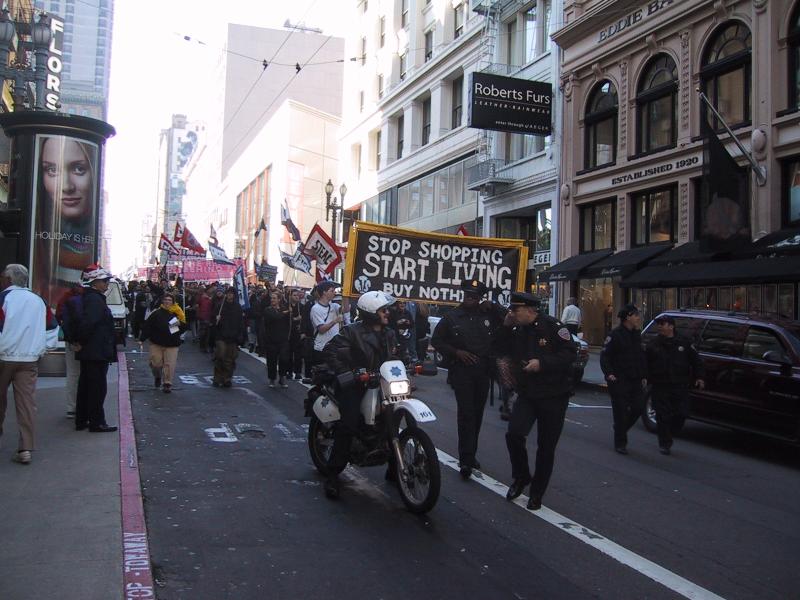 Buy Nothing Day demonstration in San Francisco, California, in November 2000. Photo by Lars Aronsson.
Mr. Bezos and others like him are obscenely rich because they are, among their other qualities in starting and running a business, both good and bad, obscenely greedy. Shoppers visiting the Amazon website cannot be blamed for taking advantage of the low prices and good service. That would be a kind of “blaming the victim”. Besides, it is all too easy for shoppers to forget about or remain ignorant of Amazon’s bad labor practices and exploitative corporate citizenship since it does those things mostly out of sight and therefore out of mind, a benefit it has as an internet company that Walmart does not have as a brick and mortar outfit.
Shoppers might fairly ask themselves, however, that even if they are not entirely complicit in sustaining Mr. Bezos’s greed, perhaps their own much smaller proportion of greed is something worth examining. It is a form of greed that drives most purchases from Amazon. Amazon sells some necessities such as groceries, but then so do stores at neighborhood shopping centers throughout the country. Most of what Amazon sells are not necessities. They are convenient luxuries, great or small, delivered to the shopper’s door. With the enormous emphasis on shopping around Thanksgiving all but swallowing up the holiday and its meaning, people might want to step back from the shopping cart, both real and virtual, and reflect on how their own petty greed feeds the monstrous greed of Jeff Bezos and his fellow billionaires and millionaires, while around the world millions upon millions of decent people go hungry.
— Techly