November 13, 2018 Vita Historia
“You shall not spread a false report. You shall not join hands with a wicked man to be a malicious witness.“
— Exodus 23:1, from the English Standard Version (ESV) of the Bible.

The job of White House Press Secretary has always been to walk a fine line between putting a good face on an administration’s policies and actions and lying about them outright. The current presidential administration and its press secretary have no such concerns and are obviously content to lie outright. When the White House released an altered video last week that made Cable News Network (CNN) reporter Jim Acosta the bad guy in an interaction with a White House intern who attempted to wrest a microphone away from him, they obviously cared not at all whether reasonable people believed their lie. They are, after all, not appealing to reasonable people. 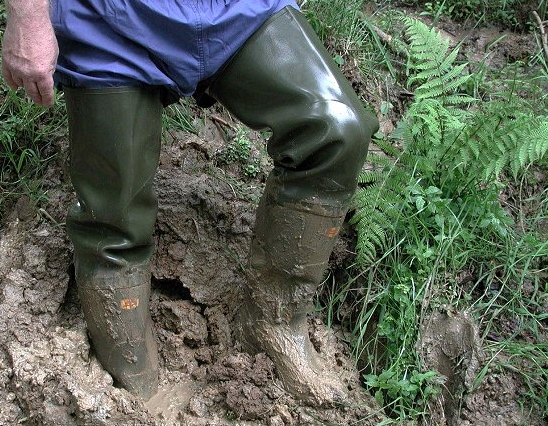 Hip boots in the mud. Photo by Booter. Deep, and getting deeper all the time.
The current occupants of the White House offices know they have a third of the country solidly in their corner, people who will believe their lies without question and with gusto. Another third of the country is in the middle, sitting on the fence to one side or another, some of them perplexed or disturbed by the behavior they see from this administration’s people, but few of them willing to act on their apprehensions. The other third of the country consists of people who are steadfastly opposed to the current administration and are willing to resist to some degree its policies and actions and work toward its demise either electorally or by impeachment and conviction. The current president and his vassals care not one whit about the opinions of those people.
What’s particularly galling about the episode with Mr. Acosta is how the current Press Secretary, Sarah Huckabee Sanders, a self-professed devout Christian whose father is a minister as well as a politician, a woman who has never uttered any sincere support for womens’ rights otherwise and who works for a reprobate in the Oval Office who openly insults women at every opportunity, suddenly got religion about the issue of men assaulting women and used that as the excuse for revoking Mr. Acosta’s White House press privileges by way of her false witness regarding the altered video. He got handsy and rough with our female intern! No, he didn’t. Doesn’t matter, because the only people we need to convince will believe our version of events, and some of the rest will be so flabbergasted and flustered by the sheer chutzpah of our lying they will be paralyzed into impotence. The other third – who cares what they think?

Ms. Sanders has apparently made peace with her hypocrisy, no doubt rationalizing her aiding and abetting of evil as somehow being in the greater cause of Christianity. It is worrying, though, that a majority of white, middle class women have gone along with her down that road. They may have other reasons than Christianity to justify their support for and following of the Pussy Grabber in the Oval Office, but they all have rationalizations that can’t have much to do with the actual man and his policies. It’s almost understandable why white, middle class men might remain in his camp, because however misguided their wishes are, too many of them surely look up to him as someone worth emulating. But the women are a different story.

Pete Seeger led an audience at the Sanders Theater in Cambridge, Massachusetts, in 1980 in a performance of Meredith Tax’s “The Young Woman Who Swallowed a Lie”, an altered version of “There was an Old Lady Who Swallowed a Fly”.

Authoritarian Personality Syndrome (APS) and Social Dominance Orientation (SDO) are two of several characteristics that may explain why women follow the current president. Both are predominantly conservative characteristics and, by extension, fundamentalist Christians such as Ms. Sanders. Far more fundamentalist Christians are conservative than liberal. Without delving too deeply into differences in religions, it is safe to say fundamentalist Christians are more patriarchal than the average Christian, and more inclined toward APS and SDO characteristics. Women have to engage in more mental gymnastics than men to rationalize their devotion to the Leader of the He-Man Woman-Haters Club, but they do it, most probably with little introspection, and if his pep rallies are any guide, they are overcome with such starry-eyed enthusiasm they will approve of anything he says or does.
— Vita