November 2, 2018 Vita Historia
For more than a decade, Republicans have been working overtime to bring Jim Crow voter suppression schemes back to the polls, this time on a nationwide basis. Their excuse is the supposed need to combat voter fraud, a decidedly small scale offense. Republicans are at their best when ginning up hysteria, however, and the frenzy they have created over voter fraud has resulted in state laws which have the side effect of stifling voter turnout by citizens who historically vote for Democratic Party candidates.
The most blatant case in this year’s election is the Georgia gubernatorial race, where Republican Brian Kemp is running against Democrat Stacey Abrams. Mr. Kemp also happens to be the Georgia Secretary of State, a position which puts him in charge of overseeing the state’s elections. He has refused to recuse himself from that position, more or less stating as his reason “Trust me.” Georgia voters can be excused for scoffing at his stance considering how Mr. Kemp has done everything in his power as Georgia Secretary of State to suppress turnout by racial minority voters. Former president Jimmy Carter, a decent man, has spoken out to urge Mr. Kemp to resign from his office as Georgia Secretary of State while he seeks the governorship, but it appears his remarks are too little too late, and at any rate are falling on deaf ears when they come to Mr. Kemp and his acolytes. 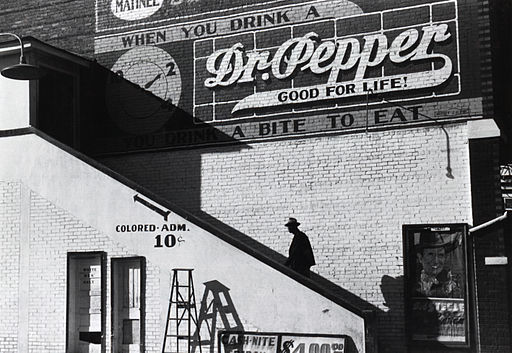 African-American patron going in the colored entrance of the Crescent Theatre in Belzoni, Mississippi, on a Saturday afternoon in October 1939. Photo by Marion Post Wolcott (1910-1990).
It’s bad enough that miscreants like Brian Kemp have been allowed by state legislatures to get away with Jim Crow voter suppression, and even encouraged by having those efforts codified in state law, but to then allow that person to oversee his own election is beyond belief. That’s like the referee of a football game saying “Trust me” as he suits up in the uniform of one team and plays for them while he pretends to call penalties for both sides impartially. There should be state laws prohibiting this obvious conflict of interest, but even while there are no laws on the books, simple decency would dictate that Mr. Kemp voluntarily recuse himself.

But no, we have most certainly passed beyond the bounds of simple decency in our society and in our politics. The only thing citizens can do is steel themselves to vote no matter what obstacles indecent people put in their way. They can accept rides to the polls for early voting from partisan activists, and as long as everyone is open about that there’s nothing wrong with it, no matter how Georgia State Patrol troopers may feel about it.

From her 1985 album Who’s Zoomin’ Who?, Aretha Franklin sings “Freeway of Love”.
This midterm election and all local and statewide elections are important for the very reason that they put in place the lawmakers who set the agenda for what happens on the national stage. It is not enough as a dutiful citizen to wake from slumber once every four years to turn out for the presidential election and then go back to sleep. That is not what Republican groups like the nefarious Project Veritas have done, who are at work every day with a kind of addled, mentally and spiritually unbalanced zeal to reshape the country in their own image. Based on the conduct of many state legislatures and school boards across the country and the draconian policies they have slipped under the door, they have been succeeding while everyone else slept.
— Vita