A Dose of Gobbledygook

October 30, 2018 Editor
“Gobbledygook” has three syllables, making it a suitable candidate for the brand name for a drug since they often have names that length, names such as Cosentyx and Myrbetriq. “Gobbledygook” doesn’t have any rarely used consonants, however, consonants such as “x” and “q” and “z”. Marketers also like to end their invented words for products with a vowel such as “a” or “o”, a practice they have followed with automobiles as well as drugs, as in Elantra, Levitra, and Toronado and Lexapro. Are they cars? Are they drugs? Manufacturers and their marketers spend millions of dollars to persuade prospective customers to feel good about their products and to feel they are unique, but it all ends up muddled together as gobbledygook. 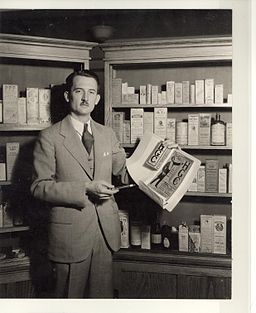 George Larrick was the last investigator to rise through the ranks to become Commissioner (1954-1965) of the Food and Drug Administration. Inspector Larrick assembled an exhibit of dubious and even dangerous food and drug products, dubbed by reporters an “American Chamber of Horrors”, which effectively documented the need for what became the 1938 Food, Drug, and Cosmetic Act. Photo from the Food and Drug Administration.
The pharmaceutical companies are under much greater restraints in product naming than the automobile manufacturers, who apparently invent their names merely from the results of market research and internal spitballing. All those names ending in vowels, a fairly rare occurrence in English, but more common in the Romance languages such as Spanish, may be intended by automobile marketers to make buyers feel they are getting something faintly exotic. Drug makers have to submit brand names of new products to the Food and Drug Administration (FDA), which has rules to ensure drug names are sufficiently distinct from one another to minimize the risk of confusion which, in the case of drugs, could lead to serious complications or death for patients if doctors or pharmacists mistakenly substitute prescriptions. There is no comparable risk involved in driving an Elantra instead of a Celica.
Using a drug’s scientific name is not an option the drug companies seriously consider because those names are often more polysyllabic and unpronounceable than the silly brand names they ultimately invent. In a very few instances, a shortened form of the scientific name becomes generally recognizable, as in ibuprofen or acetaminophen, but those can’t be trademarked. Therefore we have the option of buying Advil or generic ibuprofen, Tylenol or generic acetaminophen. It’s no accident, by the way, that both of those brand names are simpler and easier to pronounce than more recent drug brand names, since both of them were developed over thirty years ago, when competition in the pharmaceutical market hadn’t heated up to today’s incandescent level.

What has changed since then has been the increasing average age of the population and the consequent increase in demand for medicines to treat their growing health complaints. Drug manufacturers are also not above boosting demand with lengthy and frequently repeated television commercials urging prospective users to pressure their doctors into prescribing the advertised medicine. They cover the other end as well by sponsoring junkets and giveaways for doctors, nudging them toward prescribing the latest drug they have developed.

A most excellent reading by Irene Worth and John Gielgud in 1983 of T.S. Eliot’s Old Possum’s Book of Practical Cats. The entire book is presented in this video, but the part that concerns us here is the first poem, “The Naming of Cats”, which proceeds up to the 1:45 mark.

It’s a high stakes game for pharmaceutical companies that have spent millions of dollars on research and development for a drug, and then millions more on shepherding it through FDA approval, and finally marketing it. Notice how television drug ads are 60 seconds long instead of the usual 30 seconds, and how often they are repeated, particularly during the day when their target audience of older people are presumably at home watching. There’s gold in them thar hills of retirement, and pharmaceutical companies mean to get their share. Whether the residents of the golden hills are better off with the latest heavily advertised gobbledygook drug or something else, or with nothing at all, is up to them and not to marketers, no matter how warm and fuzzy the television ads portray their lives can be, to paraphrase the Rolling Stones “(I Can’t Get No) Satisfaction”, an old song the human targets of drug ads might still remember well.
— Ed.