October 21, 2018 Vita Historia
The Keynesian economic model which held sway in Western capitalist societies in the middle of the twentieth century has long since given way to neoliberalism, a policy and a philosophy which is a reworking of the laissez faire economies of the early industrial revolution. No wonder that we live in a new Gilded Age, the culmination of increasing economic inequality and degradation of publicly subsidized social services for everyone but the rich. Neoliberalism, a term which has meant many things in theory over the last one hundred years, has come to mean in fact laissez faire economics for the poor and middle class, and corporate welfare for the wealthy.
The result has been the takeover of the economy by short-sighted financial interests among the largest banks, and the takeover of politics and public policy making by those same banks and international corporations which owe allegiance to their executives and their shareholders instead of to any one national or local community. Consumers bear a great deal of the responsibility for this state of affairs, while citizens can change it. 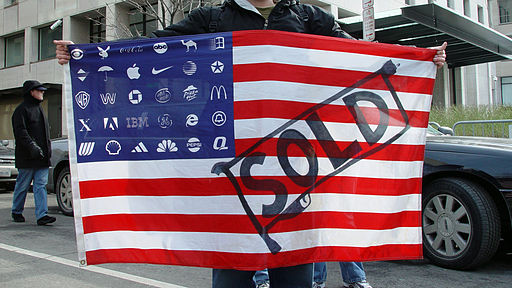 A protester at the second presidential inauguration of George W. Bush in Washington, D.C., in January 2005 holds up Adbusters’ Corporate American Flag. Photo by Jonathan McIntosh.
Consumers are passive; citizens are active. Consumers are inattentive to politics; citizens pay attention to what’s going on in government. Consumers struggle to get by and blame themselves when they cannot; citizens understand larger forces are arrayed against their interests and demand an equal place at the table. Consumers look at the wealthy and see people who helped themselves; citizens know how wealth creates wealth and privilege looks out for its own. Consumers feel helpless to change the course of society; citizens band together because they realize their power is in their numbers. 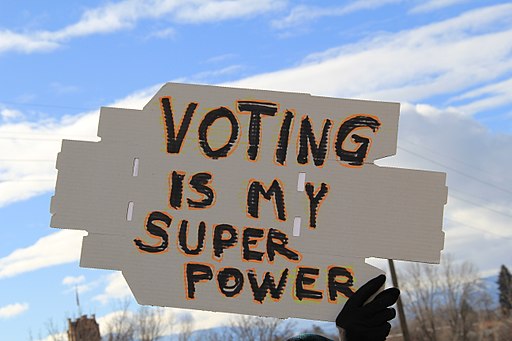 A sign at the January 2018 Women’s March in Missoula, Montana. Photo by Montanasuffragettes.
The neoliberal philosophy of the past forty years has stripped people of their view of themselves as citizens with rights, duties, and responsibilities in society and replaced it with the lumpish, passive recognition of themselves as consumers, replaceable parts in the economic machine. Meanwhile, neoliberals have sold the consuming masses on the idea that unions and publicly funded healthcare and education are bad policies, but tax cuts for the wealthy and for corporations are good because of some nebulous trickling down that’s supposed to happen. Mission accomplished!
Taking action to change neoliberal policies on the environment, on economic inequality, and on the accountability of corporations, banks, and politicians is going to have start with a change in attitude among the populace from consumers to citizens. It starts with getting the money out of politics, and that starts with overturning the Supreme Court’s 2010 Citizens United decision, which equated money with speech. What greater symbol for the neoliberal outlook can there be than “money talks”? The second most important step toward change would diminish the power of the big banks by reinstating the Depression era Glass-Steagall Act, separating commercial and investment banking. The third step would end government subsidies for the fossil fuel industry and divest from it entirely. All easier said than done, of course, and only the first few of many steps to curtail the undue influence of the rich and powerful over society, but once consumers get up off their couches and walk down as citizens to their voting places they will be taking the steps necessary to change a system that works only for a privileged few, and not for them.
— Vita