Timing Is Nearly Everything

October 2, 2018 Isidore Gnome
Early autumn used to be the best time to sow seeds of cool weather grasses in most of the country, and early spring was the best time to sow seeds of warm weather grasses, primarily in the South. There were local variations on what kind of grass seed to sow where, and as always with gardening, rules of thumb were not carved in granite. Since the timing of early autumn and early spring vary around the country, it might be simpler to consider the Mid-Atlantic states as an example, where early autumn sowing was best between September 1 and October 15, and early spring sowing was best between March 1 and April 15.
In the twentieth century, much of the Mid-Atlantic region was in the United States Department of Agriculture’s (USDA) hardiness zones 3, 4, 5, 6, and 7. The southern part of the region was also in the transition zone for cool weather and warm weather grasses. Gardeners and landscapers typically planted both types of grass and sowed grass seed of both types in spring or fall as they preferred, though most found the greatest success with cool weather grass seed sown in the fall. That has all changed noticeably over the past 30 years and it is well past time for prudent gardeners and landscapers to adjust to the new climate. 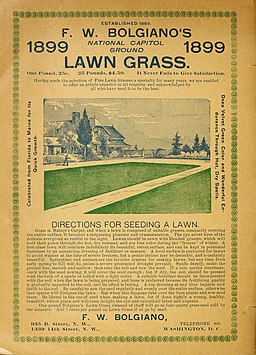 F.W. Bolgiano, a grass seed company based in Washington, D.C., in the heart of the Mid-Atlantic region, recommended in their 1899 brochure sowing a blend of seed types in spring and autumn, though without specific details on the seeds or the timing. Photo scan from the digitized illustrations collection of the Biodiversity Heritage Library (BHL).
The USDA adjusted its hardiness zone map in 2012, moving all of them north from where they were in the 1990 map. The Mid-Atlantic is now covered by zones 4, 5, 6, 7, and 8. Gardeners being students of nature, they didn’t really need the USDA to tell them what was happening with their plants and how things had changed. Still, it can be hard to set aside old habits tied to the calendar, such as sowing and planting times. Adjusting to changes in the types of plants that will do well in a particular area is also difficult and can take some getting used to, but people must adjust or they will see their time and efforts wasted on planting the wrong plant in the wrong place at the wrong time, rather than doing the opposite as good practices have always dictated.
Farmers know this because their livelihood depends on it. Professional landscapers are beginning to understand it as well, though in many cases they perform their work on behalf of well-to-do clients who don’t necessarily care about taking a loss on forcing a favored plant to survive. The landscapers themselves need to operate at a profit, but their clients may not mind throwing good money after bad in keeping a zone 5 plant alive in what has become a zone 6 environment. Home gardeners typically don’t have such resources, and often have better sense. For years they sowed seed of tall fescue, a cool weather grass well suited to Mid-Atlantic growing conditions, and they had success sowing it between September 1 and October 15. 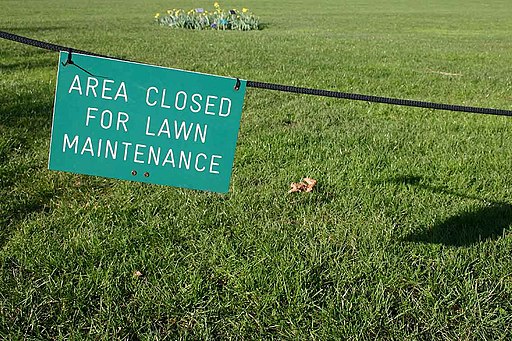 Sign at the Royal Horticultural Society (RHS) Wisley Garden in the county of Surrey, south of London, England. Photo by Si Griffiths.
But not anymore. Now it is best to wait at least two weeks. Now the season lasts from September 15 to October 31. There may even be little harm in sowing grass seed right up to Thanksgiving in the southern portion of the Mid-Atlantic region. It could also be time to reconsider whether to keep up a cool weather grass lawn at all. Perhaps it’s better to plant Zoysia grass, or to let the bermuda grass take over, which it has been trying to do for decades now anyway, creeping into everything, especially in the heat of high summer, when the tall fescue faints in the hot weather without extra water to sustain it. Maybe now the favored time for sowing grass seed should be the early, early spring, from February 15 to March 31, and maybe that grass seed should be of warm weather grasses. Gardeners in the North who have friends and relatives in the South will have to ask those gardeners to pass along their rules of thumb for tending new plants in these new times.
— Izzy