Figure It Out for Yourself 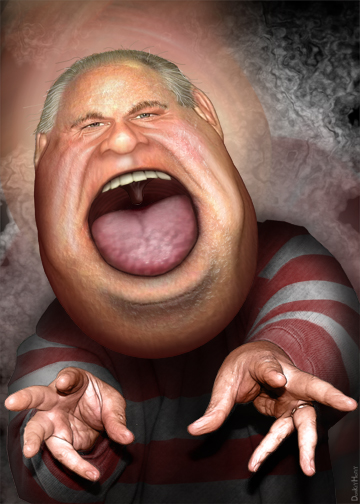 March 2012 caricature of Rush Limbaugh, by DonkeyHotey.
On Tuesday, September 11, as Hurricane Florence bore down on the southeastern United States, Rush Limbaugh spouted off once again on his radio program with his own ideas about hurricanes and climate change, much like he did last year when Hurricane Irma was bearing down on southern Florida. Last year, after cynically boasting of his skepticism over the forecast track and intensity of Irma, which he attributed to scare mongering by the political left, he hightailed it from his West Palm Beach estate in southern Florida to Los Angeles, California.
Presumably Florence does not threaten any of Mr. Limbaugh’s properties, and he has not made headlines for hypocrisy this time, but merely for being a dangerous loudmouth as usual. If Mr. Limbaugh remains skeptical of anthropogenic climate change and also thinks the hardworking forecasters at the National Hurricane Center (NHC) are in league with sellers of bottled water and other emergency supplies, then he should start doing his own weather forecasting and climate assessments using publicly available data from weather stations and satellites. He and his conspiracy theory acolytes would probably find other reasons to twist the facts to suit their beliefs, such as intimating the data were skewed by leftists, but it’s best not to go too far down the rabbit hole with them. 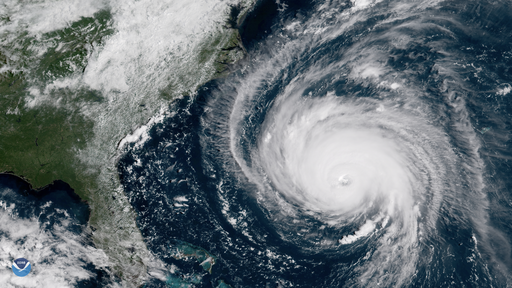 In this satellite image from the National Oceanic and Atmospheric Administration (NOAA), Hurricane Florence nears the East Coast of the United States on Wednesday, September 12, 2018. West Palm Beach, home of Rush Limbaugh, is safely out of the way at the bottom left of the picture, near the southern tip of Florida.
It’s easier than ever to gather useful data from public sources in this, the Information Age. It’s easier, however, and apparently more profitable, to sit on your butt in the back of the class and shoot spitballs. It’s unfortunately likely that some people who heeded Rush Limbaugh’s lazy, reckless frothings on hurricanes and climate change are now coping with the destructive flood waters brought on by Hurricane Florence, which doesn’t care what he has to say.
— Vita