September 9, 2018 Editor
Nike’s new advertising campaign featuring Colin Kaepernick poses some ethical questions for him and for potential buyers of Nike’s athletic apparel. It does not effectively pose any ethical questions for the company, Nike, because they have never been overly concerned with that sort of thing, as continuing controversy over its reliance on overseas sweatshop labor attests. For Nike the new advertising campaign is strictly a business proposition. 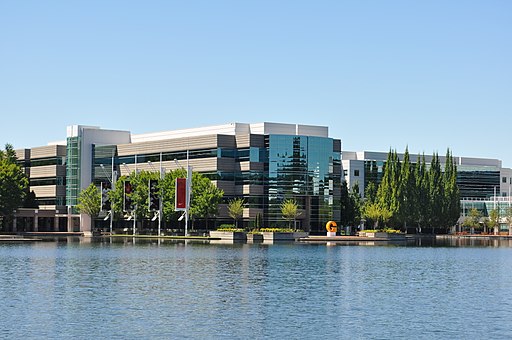 Nike Headquarters near Beaverton, Oregon, in July 2010. Lake Nike is in the foreground. Photo by Brandon Carson.
Mr. Kaepernick has been under contract with Nike since 2011, but this is the first time the company has prominently featured him in their advertising. The campaign has everybody talking, and that of course is the goal of all advertising. Nike may or may not support the cause of protesting police brutality and racial injustice, but more likely they are simply capitalizing on Mr. Kaepernick’s notoriety and are willing to sit on the fence about his protest cause, no matter what their ad slogan implies about it.
What’s more difficult to parse is the willingness of Mr. Kaepernick to make himself the face of such an amoral corporation. It’s hard to believe that a socially aware man like him would be completely unaware of the lingering taint of Nike’s historic exploitation of cheap, non-union labor. Nike has dozens, perhaps hundreds, of athletes under contract to promote its products, but none have been primarily renowned for social justice causes as much as Colin Kaepernick. There are substantial financial incentives for him in participating in Nike’s advertising, though it beggars the imagination to believe he is unaware of the conflicting signals he is now sending people who have supported his protest.

The targets of Nike’s advertising, the buyers of its shoes and other athletic gear, are probably mostly unaware of Nike’s history of exploitative labor practices. That has to be what Nike is counting on and why they are willing to put forward a controversial figure to promote their products. Nike knows its target market is under 30, and to many of them Mr. Kaepernick is a hero, while only a minority of them may know or care about Nike’s history of bad labor relations. Nike is still in business, after all, and doing better than ever. For Nike’s young customers, there is likely no dissonance bubbling up from this advertising campaign.

It is mostly older folks who are upset with Mr. Kaepernick’s kneeling protests, and Nike doesn’t need their business to stay afloat. The campaign is a cynical, amoral ploy by Nike, which is no surprise, but it’s puzzling to consider Mr. Kaepernick’s motivations, if they are indeed any deeper than face value, such as how Nike depicts him on their poster, accompanied by a slogan with echoes of Spike Lee’s Do the Right Thing, or as Nike might appropriate it, Just Do the Right Thing.
— Ed.