August 31, 2018 Vita Historia
Arizona Republican Senator John McCain died on August 25 after a long battle with brain cancer, and since then there has been much discussion nationwide of his role as an American hero both for his service in Vietnam and as a political figure afterward. Less noticed was the 63 month jail sentence imposed on former National Security Agency (NSA) contractor Reality Winner on August 23 at a federal court in Georgia for supposedly violating the Espionage Act of 1917. Ms. Winner had in early 2017 turned over to online investigative news outlet The Intercept classified documents relating how the Russians had meddled in the 2016 presidential election. For many people and for Ms. Winner herself, what she did was more whistleblowing about malfeasance in the United States government than espionage on behalf of a foreign power because the NSA obviously knew of the meddling but for reasons it won’t specify sat on that information. 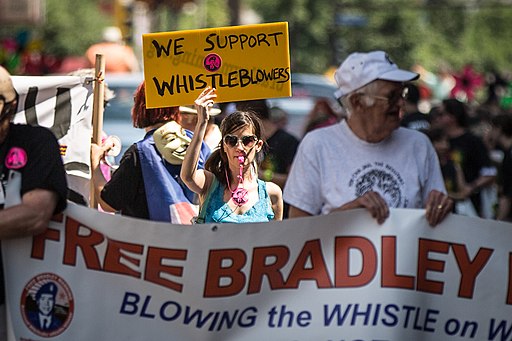 2013 Twin Cities Pride Parade in Minneapolis, Minnesota, in support of whistleblower Bradley (later Chelsea) Manning. Photo by Tony Webster.
Reality Winner is the latest in a recent series of whistleblower defendants to be charged by the government under the Espionage Act, starting in the Barack Obama administration. The most notable whistleblowers charged have been Army Private First Class Bradley (now Chelsea) Manning in 2010, Central Intelligence Agency (CIA) officer John Kiriakou in 2012, and NSA contractor Edward Snowden in 2013. Ms. Manning and Mr. Kiriakou have served time in prison, and Mr. Snowden lives as an asylum seeker in Russia. The Espionage Act was always a draconian piece of legislation open to abuse by authoritarians in power, but it is only in the past ten years that those authoritarians have enlisted it to hammer down on whistleblowers to intimidate others into silence.
Calling whistleblowers national heroes in no way takes anything away from Senator McCain. Rather, it broadens the concept of heroes to include those whose patriotism included the courage to speak out against abuses of patriotism and authority by those in power. Sitting quietly by while a foreign power meddles in American elections is not patriotism, and neither is putting a lid on military abuses in Iraq or condoning torture by CIA agents or spying on American citizens at home. Whistleblowing on those abusers and their actions is true patriotism, while using the heavy hand of the Espionage Act to prosecute the whistleblowers is another abuse of government authority.
— Vita