August 26, 2018 Isidore Gnome
The federal government sends out mixed signals about dietary health by promoting the establishment of fast food restaurants in poor city neighborhoods on the one hand, and then on the other hand advocating healthier eating by limiting consumption of fast food. It boosts the use of cheese in fast food items, and then suggests consumers curtail their dairy consumption. It works hand in glove with ranchers in the beef industry by leasing grazing rights to federal lands at minimal cost, and then warns the public off eating too much red meat. That’s a lot of taxpayers’ money wasted on bureaucrats working at cross purposes with each other. 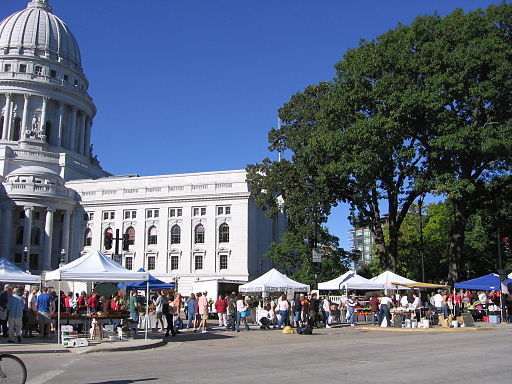 The Dane County Farmers’ Market in September 2007 on the grounds of the state capitol building in Madison, Wisconsin. It is the largest producers-only farmers’ market in the nation. Photo by Kznf.
People are so inured to confusing messages about what’s healthy to eat and what isn’t that most of them pay little mind to medical experts and bureaucrats, or rather they take their advice with a grain of salt, and that would be in the form of sea salt or Himalayan salt for foodie elites, and regular old table salt for everybody else. Like everything else in America over the past thirty or forty years, food culture has split into two halves, something akin to the haves and have nots. There are the foodie elites of the professional and upper classes, and then there is everybody else, from the lower middle class which is frantically scrabbling to keep from sliding down into the working class, which is itself struggling to stay one step ahead of poverty.
Americans can make a quick, cheap meal of sorts from a one or two dollar box of macaroni and cheese mix. For some, meals like that are their only option. It’s disgraceful that people of limited means should have to bear the disdain of people with nearly limitless means because their diet is based on calorie value per dollar over nutritional value. The poor and the economically struggling don’t have the luxury of being absolutely sure of their next meal. As to how the well off view their meals, anyone who has ever worked as a table busser or as one of the waitstaff in a high end restaurant can attest to the tremendous amount of food wasted by the patrons, even though they may be spending for one meal what a working class person can expect to earn in a day. The upper classes have that luxury because they have the security of knowing there’s more where that came from.

Sid Caesar and Imogene Coca as The Hickenloopers, Charlie and Doris, visit a health food restaurant in a skit from Your Show of Shows, with appearances by Howard Morris as another customer and Carl Reiner as a waiter.

Unlikely as it seems, the fast food restaurants scorned by foodie elites as obesity enablers for the great unwashed may hold the key to turning things around for people who can’t afford to buy groceries at Whole Foods, aka Whole Paycheck. Taking their cue to keep promotions of healthier options low key so as not to arouse the suspicions of poorer customers whose purchases are based on calorie value per dollar, yet feeling increased pressure from public health groups to offer healthier foods, fast food restaurants increasingly change ingredients and practices in a balancing act to satisfy both constituencies. No one will ever claim that a cheeseburger and fries are healthier than a homemade meal of vegetables from a farmers’ market, but given the realities of human psychology and the country’s current economic conditions, demonizing those who choose to eat the former more often than the latter is ultimately unhelpful in lessening the obesity epidemic, while reinforcing the widening economic inequality that is driving it.
— Izzy