The Limits of Unlimited

August 21, 2018 Techly DoRight
Wireless carriers like to offer “unlimited” data plans to customers, and as they currently configure their plans they truly are unlimited, but a wary customer would be wise to check the fine print anyway. The typical wireless data plan for a monthly billing cycle offers a little over 20 GigaBytes (GB) at the fastest speed available, and thereafter throttles the customer down to slower speeds. The customer still has access to wireless data for the remainder of the billing cycle, though at a reduced speed that can sometimes make using the internet frustrating, or practically impossible at the worst. That satisfies the letter of an “unlimited” offering, if not the spirit. 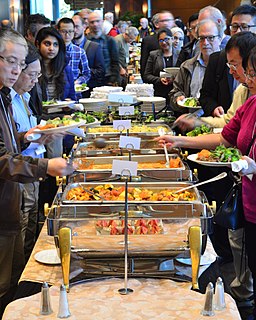 A buffet lunch at a conference in November 2017. Photo by Raysonho.
Characterizing a wireless unlimited data plan as an “all you can eat” buffet misses the mark because most people can and do find ways to use more data as the carriers offer more, while their capacity for gorging on more pasta or Chinese food really does have limits. Wireless data, and broadband service generally, is more like the road system in that with greater capacity comes greater traffic. Build it and they will come, as it were.
The next generation of wireless data will be 5G, available in some areas of the country starting in 2019. The speed and capacity of the 5G network is supposed to be ten to a hundred times greater than the current standard of 4G. Supposedly it will be competitive with wired broadband service. That’s a good thing, and it’s likely that carriers may be able to offer “unlimited” data plans that will be closer to the true meaning of the word, as in “without limits”. There’s reason for skepticism, however, if we recall the highway model for wireless broadband service rather than the buffet model.
In the buffet model, 5G service would expand the size of the restaurant, increasing the seating capacity, and the servers would never allow any of the foods at the buffet to be completely depleted without quickly replenishing them. That doesn’t mean that the average customer will magically be able to eat more in this roomier restaurant with lightning quick service. In the highway model, 5G service will amount to more and wider lanes that will allow traffic to move faster, at least until the improved highway fills up and the increased traffic slows everyone down again because people use the increased capacity to drive more. 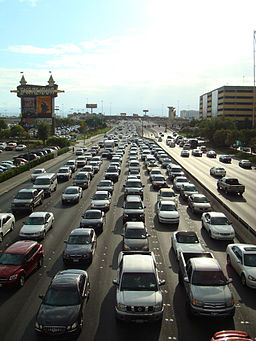 Bumper to bumper traffic in Las Vegas, Nevada, in May 2008. Photo by Erum Patel.
Like a city with a highly developed road network, a 5G wireless network will attract manufacturers who will make things for people to use in taking advantage of the excellent new service. For 5G that means expanding use of Internet of Things (IoT) devices and, eventually, self-driving vehicles. Those expanded uses will fill the capacity of the new network, making any carrier’s offer of unlimited data plans to consumers again a proposition that will likely be restrained in the fine print. The carriers like using the word “unlimited” in attracting customers, however, since they know customers can no more resist the fantasy of unlimited data than they can resist an “all you can eat” buffet, regardless of the reality of limited capacity.
— Techly