August 17, 2018 Editor
Last weekend was the anniversary of the Unite the Right rally in Charlottesville, Virginia, and while the organizer of that rally was denied a permit by the mostly dysfunctional Charlottesville city government for a reprise this year in Charlottesville, he was able to promote a rally in Washington, D.C., where it fizzled. Meanwhile, in Charlottesville, police employees showed up in force, 1,000 of them, in order to make up for last year when they stood by and did as little as possible to keep the two sides from fighting. Since the police employees had even less to do this year despite their greater numbers and show of macho force in riot gear, they contented themselves with bossing around peaceful, law-abiding citizens who wished to conduct business as usual on the downtown pedestrian mall, site of some last year’s conflicts. 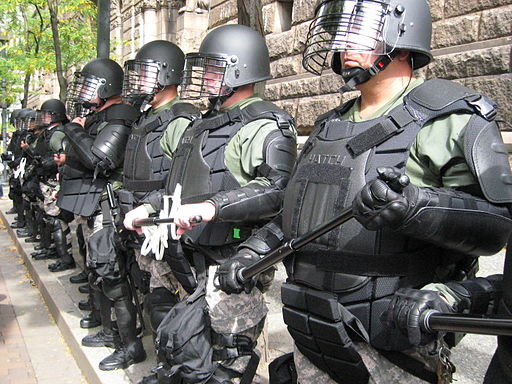 Police employees power tripping at the G20 summit in Pittsburgh, Pennsylvania, in September 2009. Among the other tricked out military gear, note the desert camouflage trousers, surplus from the battlefields of Iraq and Afghanistan, being worn by servers and protectors in the green, leafy environs of home as they serve and protect the interests of the conservative 1%. Photo by katesheets.
The police appear to have no concept of reasonable proportion and common sense discretion which would permit them to gauge an appropriate middle ground in these civil conflicts. They are hammers, and to them almost everybody looks like nails. They are either busting heads, almost always of those on the left, or standing by idly and collecting overtime while the two sides in fascist and anti-fascist protests engage each other violently. It’s not hard to guess based on police conduct that most of them sympathize with protesters on the far right. No one impartial appears to be directing the police at these events. This is nothing new in American life, that the police would side with the most conservative portions of the citizenry against the left. The police slogan “To serve and protect” has always implied a narrow constituency. What’s all the more interesting then is that the supposedly liberal city government in Charlottesville, out of fear and a desperate desire to reclaim their reputation from last year’s debacle, deferred to local and state police organizations eager to impose for one weekend an authoritarian regime in an empty show of over-the-top policing.
— Ed.