August 7, 2018 Vita Historia
Archaeologists recently uncovered the remains of a public library in Cologne, Germany, which they surmise was built in the second century of the common era by the Romans or the workers of the Roman client state in control of the region. The architecture follows the model of other large Roman libraries of the period, such as the one in Ephesus, on the western coast of modern Turkey. The reason for thinking it was a public library rather than a private one is the great size of the structure and its location in the public forum of the ancient city, where all buildings were public. 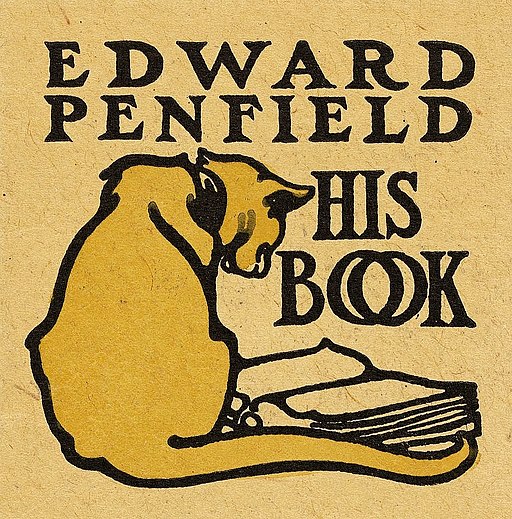 Bookplate of American painter and illustrator Edward Penfield (1866-1925). Bookplates are labels people paste into the frontispiece of their books to declare ownership. They were more popular a century ago than now, and as seen here some readers contrived custom bookplates.
A public library of two thousand years ago was not the same as a public library now, offering books on loan to members of the general public. Because books were hand copied into scrolls or codices, they were limited in number and expensive to produce. No one could walk in to a public library of two thousand years ago and expect to walk out with one or more books under their arm, to be returned after several weeks. People read the books in the library and the books never left the premises.
The meaning of “public” was also limited at that time to those who were literate and therefore had a reason to be there accessing the books. These would have been scholars of one sort or another, whether in the employ of government, academia, or a wealthy individual, and they would have been almost certainly all male. Lending libraries did not come about until the Renaissance, after the invention of the printing press made available large numbers of copies of books at lower cost.
Even then, the number and type of people who could borrow books was limited. Universities and colleges had their own libraries, with their collections available not to the general public but to students and faculty of the institution. That model persists to this day. Private societies lent out books to their members, who also contributed books. They were lending libraries, but in no sense were they public. It was not until civic groups and prominent citizens in Boston, Massachusetts, created the Boston Public Library in 1848 that the institution of the lending library as we know it came into being. The Boston Public Library was the first institution in the country that was open to all and was funded largely by taxpayers, with some assistance by private endowments and gifts of books. 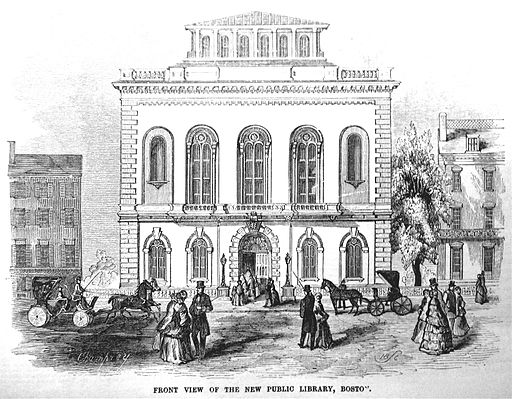 An 1855 engraving showing the future building of the Boston Public Library on Boylston Street. The library moved into the building in 1858 and stayed there until 1895, when it moved into the grand building on Copley Square where it has remained to this day.
The model caught on, obviously, since today there are over 16,000 public libraries around the country. In the past 30 years or more, two great changes have affected those public libraries, and they are no longer what they were during their heyday in the twentieth century. The first change came from the effects of cutbacks in social programs starting with the Reagan administration. Homeless numbers increased as politicians undercut the social safety net and as mental hospitals could no longer afford to house indigent patients, setting them loose on the streets. Shelters that took in homeless people overnight often turned them out during the day, and the homeless gravitated toward public libraries for safe daytime shelter with access to bathrooms. 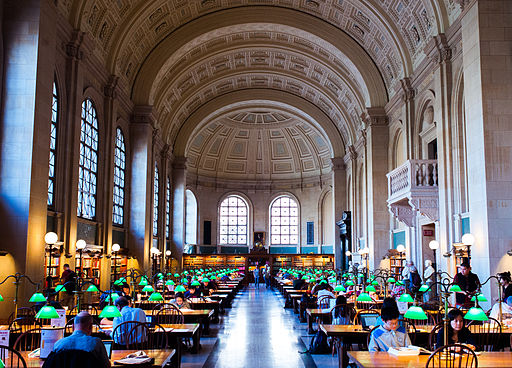 Boston Public Library Reading Room in October 2013. Photo by Brian Johnson.
The second change came about with the rise of computers and the internet. Public libraries have gamely kept up with the technological changes despite cutbacks in taxpayer funding, and for the most part they have successfully integrated patrons’ interest in checking out electronic books as well as traditional paper books. Where conflict has arisen it is in affording access to library computers to patrons, some of whom had little interest in setting foot in their local public library until it installed computers with free internet.
With the influx of people who are not readers as much as internet users and are likely as not indifferent to norms of behavior in the library, and homeless people who sometimes abuse library facilities and even other patrons, librarians now have their hands full with duties that have nothing to do with their traditional training in library science. Patrons who are readers and have used their local library’s services in person for decades no longer feel comfortable there, and now often prefer checking out electronic books from the library’s website rather than visiting the library in person. Pity the unfortunate librarians then, who cannot escape the loud cell phone users, the raucous children who have been dumped by their parents in the young readers’ room as if it were a free day care center, and the homeless people who, often through no fault of their own, have been thrown on the good graces of the librarians, but who complicate the work day for those overburdened librarians by the criminal or mentally unstable acting out of some of their number.
— Vita