Saving Up for a Rainy Day

July 29, 2018 Techly DoRight
Battery storage has long presented a conundrum to renewable energy enthusiasts who tout the relatively benign environmental footprints of wind and solar power. The batteries can contain toxic metals and chemicals which cause environmental damage in mining and formulation, and then again when they have exhausted their usefulness and users need to somehow safely recycle or dispose of them.

Partial eclipse of the sun – Montericco, Albinea, Reggio Emilia, Italy – May 1994. Photo by Giorgio Galeotti.
For a time, it seemed the answer for homeowners using a solar array was to sell excess power produced during the day to the power company and then draw on grid power at night and on cloudy days. These grid-tied systems effectively used the power company as storage, mostly dispensing with the need for a bank of batteries at home. Unfortunately for homeowners with grid-tied systems, it appears power companies are backing away from those setups in order to protect their equipment and to maintain tighter control over power generation.
Power companies have been investing in their own renewable energy production as costs go down. Since there is no external backup for the electricity generated by the power company, the power companies need to employ huge amounts of batteries. Batteries have improved in the past generation both in toxicity and length of usable life from the days of lead acid batteries. Improvement does not mean they are exactly environmentally friendly. The problem comes down to relative harm, such as whether it is less harmful to the environment to drive an electric car when the source for its electricity is a coal burning power plant. 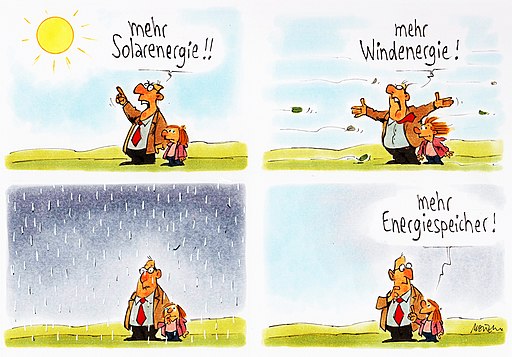 An illustration of the relationship of renewable energy to energy storage from the German cartoonist Gerhard Mester (1956-). Panel 1: “More solar energy!!” Panel 2: “More wind energy!” And in the last panel: “More energy storage!” Incidentally, Germany is a world leader in solar energy production despite receiving less sunlight than many other industrialized nations.
Nothing people do technologically has zero impact on the environment, and arguments from the extremes of both sides of the tug of war between those in favor of continued use of fossil fuels and those who want greater reliance on renewable energy are neither accurate nor helpful. Continuing the status quo of burning fossil fuels for most energy production is clearly a path to environmental catastrophe, while renewable energy production does not have quite as low an impact on the environment as some enthusiasts suggest. It is in the batteries especially that renewable energy has an unfavorable impact.

Nevertheless, in countries with higher renewable energy production than the global average the air is cleaner and greenhouse gas emissions are lower. Because the sun doesn’t always shine and the wind doesn’t always blow, the key to minimizing reliance on batteries, the most toxic element in renewable energy use, is diversification of power sources supplying the grid, from geothermal to hydroelectric. None of these methods of supplying the power necessary for humanity’s modern lifestyle are perfect, but they are all better than the alternative of continuing down the path of polluting the air and warming the planet. The two biggest obstacles to switching the United States to 100 percent renewable energy are the fossil fuel industry interests entrenched in national politics, and battery technology. Of the two, the latter will be more easily overcome by a concerted effort, and with time the new technology will push out the former technology and its moneyed adherents as obsolete and destructive. But will it be soon enough?
— Techly