July 15, 2018 Techly DoRight
The Trump Baby balloon that floated over London, England, last Friday was the culmination of efforts on the part of graphic designer Matt Bonner and a team of political activists and balloon fabricators who wanted to make a statement about the petulant and childish temperament of the current American president. As a mocking indictment of his destructive behavior, it is an effective piece of work. The activists plan to have the balloon shadow it’s real-life angry baby model as much as possible wherever he travels around the world. 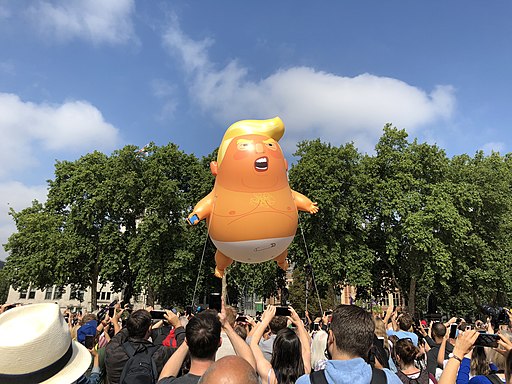 The Trump Baby balloon rises over London’s Parliament Square. Photo by Michael Reeve.
Large balloon caricatures came about with the work of Tony Sarg on the Macy’s Thanksgiving Day parade in the 1920s. Mr. Sarg was a German-American puppeteer who took the concept of marionettes and simply turned them upward and inflated them, though the comparison ends there because the guide ropes for a balloon caricature do no more than tether and control them, as opposed to the thin wires that puppeteers use to manipulate the movements of small marionettes.
The technology for creating large balloons with discretely modeled characteristics like arms and legs has changed over the years, of course, with the biggest difference coming in the planning stage when designers can now model the character with 3D animation on a computer, eliminating some of the trial and error involved in the design and fabricating of earlier balloons. Experienced engineers at the fabricating plant can then examine those computer designs and make or suggest alterations that will improve the balloon’s stability when floating overhead and streamline its manufacturing, all without greatly changing if possible the designer’s intent. 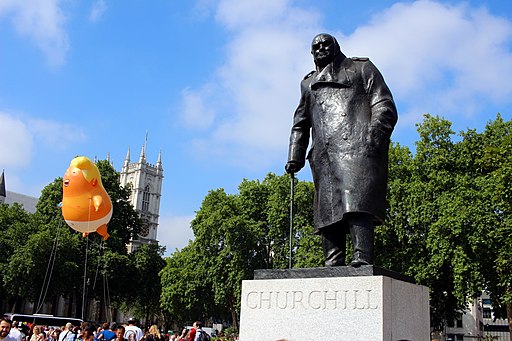 The statue of Winston Churchill in London’s Parliament Square. Photo by Braveheart.
These protest balloon caricatures appear to be gaining popularity, and it’s easy to see why since they fit the criteria of making an impact over a wider area than a hand-held placard and they can show up around the world as needed with a relatively small support team. An excellent graphic design can also generate revenue for the protest movement through merchandising. The main difficulty in deploying the balloons is in securing permission from government officials, which ought not be that much different from acquiring the usual permits for a protest other than stipulating a maximum height for the balloon when it is in the air.

Since the balloons are not intended to float higher than about 50 feet, conflicts with aviation should be minimal. The main obstacles aloft to safe deployment, besides high winds, are things arising from the ground such as power and light poles and electrical and communications cables. Let’s hope these symbols of protest continue floating freely wherever there’s enough helium a need for them, as a reminder to everyone that many powerful public figures need to have the air let out of them, not necessarily for their benefit since it can be all but impossible to deflate their often massive egos, but for ours as citizens in a still relatively free society.
— Techly