July 13, 2018 Vita Historia
Researchers at the University of Southern Denmark recently discovered arsenic in the green pigment used on the covers of some Renaissance manuscripts, which means they are unreadable without special handling. The pigment was not put there by the original writers or printers, but by Victorian preservationists who were most likely trying to prevent insect damage. The pigment, known as Parisian Green, was known at the time to ward off insects, but the link to arsenic was little known at the time. Production of Parisian Green has since been discontinued, joining a list of other toxic pigments whose drawbacks became known over time.
The late nineteenth century Impressionist painter Vincent van Gogh may have succumbed to lead poisoning, dying at 37 of a self-inflicted gunshot after one of his many fits of delirium. This is one of many speculations about van Gogh’s troubled mental life. Van Gogh was extraordinarily prolific in his short career, producing over two thousand paintings in the course of ten years. He left behind many letters describing his technique and materials, and from those historians have speculated van Gogh’s high productivity exposed him to the lead in his oil paints more than what other artists of the period experienced. 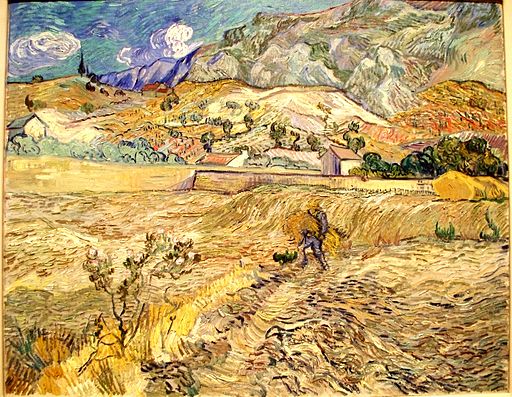 Enclosed Wheat Field with Peasant / Landscape at Saint-Rémy, an 1889 painting Vincent van Gogh produced while staying at an asylum in southern France.
There is another aspect of van Gogh’s use of certain pigments which has come to light in recent years, and that is the susceptibility of some of them, mainly the yellows he mixed with white in order to lighten them, to fade to a dull brown after prolonged exposure to sunlight. Van Gogh’s paintings of sunflowers are particularly vulnerable to losing their unique quality on account of this unfortunate chemical reaction. Ironic that an artist who delighted in the strong sunlight of southern France and attempted to bring out its shining brightness in the strong yellows of his paintings should have his efforts diluted by the effects of sunlight.

Homo sapiens have some of the best color vision in the animal kingdom. Only birds have better color vision overall, as evidenced by the wide range of color displays in their plumage. Humans don’t have colorful plumage, of course, but there are many other ways we make use of our excellent color vision, and one of them is our zealous pursuit of pigments and dyes to reproduce the colors we see in the world. Our desire to display the colors we see in the world and express to others our own imaginative vision manifests not so much with our own bodies, which are limited canvases, but in art and design, in paintings and fabrics since antiquity, and in film and electronics over the last hundred or more years.

Vincent van Gogh, driven as he was to recreate in his paintings the life he saw not only with his eyes, but with his mind’s eye, may have gone on even knowing the health risks of some of the pigments he was using because the colors he sought could be achieved no other way at the time, though he may have reconsidered using some others had he known of their eventual degradation of his vision. It’s also possible that for him the painting was the thing, capturing what he saw and felt at the moment, and letting the future be what it will.
— Vita