June 24, 2018 Isidore Gnome
Historically, the term “poor man’s fertilizer” has referred to snow cover which upon slowly melting releases nitrates into the soil, and particularly to spring and autumn snows which make that fertilizer available to plants either just starting top growth or sending food down to their roots in preparation for winter dormancy. Expanding the definition to include the rain from summer thunderstorms makes sense because the “poor man’s fertilizer” of nitrates formed in the atmosphere comes down then in torrents, releasing far more than the trickle from melting snow, but the nitrates for greening up farmers’ fields and homeowners’ gardens is every bit as free and as welcome.

People and animals would no doubt rather do without all the drama accompanying the rains from thunderstorms. An ordinary sort of rain shower, however, does not produce the amount of nitrates for fertilizing plants that a raging thunderstorm can make in its electrical transformation of nitrogen into nitrates. Plain nitrogen, even though it is listed as such on commercial products as a fertilizer, is not the actual chemical used. Plants cannot do anything with plain nitrogen, nice as that would be since it is the most abundant constituent in the atmosphere, making up 78 percent of the air around us. To make anything of all that nitrogen, plants need it transformed into nitrates, and while rain and snow gently falling provide some, the lightning from a thunderstorm creates nitrates in abundance. 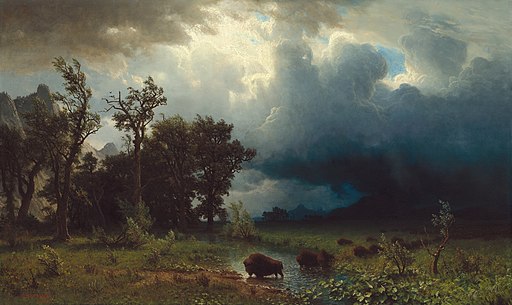 Buffalo Trail: The Impending Storm, an 1869 painting by Albert Bierstadt (1830-1902).
Because a thunderstorm can drench an area with over an inch of rain per hour, many of the nitrates it produces run off into streams and rivers before providing any benefit to plants on land. This fertilizer runoff becomes more of a problem when it is increased by contributions from people who either added fertilizer to the land themselves, or dumped it into the atmosphere as a byproduct of their manufacturing and energy production. Sulfuric and nitrous oxide emissions from industry and vehicles produce particulate pollution that hangs in the air until it comes down in solution as acid rain, which is also heavy with nitrates. It is the countryside downwind of industry and heavily populated areas that suffers the worst effects of this excess of nitrates. For farmers and gardeners downwind, thunderstorms produce too much of a good thing.

For all the damage thunderstorms can do, from wreaking havoc on home electronics to pelting livestock and crops with hail, they also provide benefits by fertilizing the soil and cleaning the air. Native Americans were well aware of the duality in thunderstorms, and tried to take the bad in stride with the good. Part of staying safe during a storm comes from maintaining a healthy respect for its destructive potential, and then part of enjoying life comes from stepping outside after the storm has passed and taking in the fresh smells and sights of rejuvenation.
— Izzy