June 3, 2018 Vita Historia
“Equality of rights under the law shall not be denied or abridged by the United States or by any State on account of sex.” — Section 1 of the Equal Rights Amendment.

It’s a fair guess that at some point in their lives most women have had someone, usually a man, but sometimes another woman, urge them to smile more, as if it were incumbent upon women to always appear pleasant and non-threatening. No one tells men to smile, except maybe for pictures. This past week, on Wednesday, May 30, Illinois became the 37th state to ratify the Equal Rights Amendment (ERA), leaving the amendment one state short of the approval by three fourths of the states required to become law. That’s reason to smile. Celebration, however, may still be a long struggle away.

When the United States Congress approved the ERA in 1972, they sent it on to the states with a seven year limit for ratification written into the proposal, something that had become common practice ever since the proposal for the 18th Amendment (Prohibition), with the one exception of the 19th Amendment (Women’s Suffrage). After ratification stalled at 35 states in 1977, Congress eventually granted an extension on the time limit until 1982. The amendment has remained in limbo since then, until 2017 when Nevada, under pressure from a renewed groundswell in the women’s rights movement due to current events both in politics and in the workplace, ratified the amendment to move the total to 36. 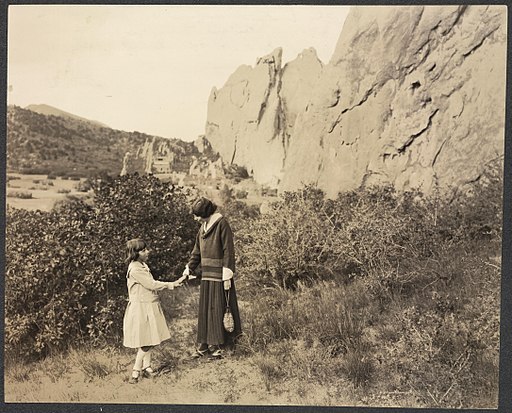 Alice Paul, on the right, leader of the feminist movement in America and vice president of the Woman’s Party, meets with Mildred Bryan, youngest Colorado feminist, in the Garden of the Gods at Colorado Springs, where on September 23rd, 1925, the Party launched its western campaign for an amendment to the Constitution giving equal rights to women. Photo by H.L. Standley.
There is some question whether the amendment will indeed become law with ratification by a 38th state because of the time limit imposed in its proposal by Congress, and because a handful of state legislatures have rescinded their ratification since the 1970s. There is nothing explicit in Article V of the Constitution, which deals with the amendment process, stating Congress should impose a time limit on ratification. In the 1921 case of Dillon v. Gloss, the Supreme Court inferred from Article V that Congress had the power to impose a time limit, settling that argument on shaky ground. In 1939, in the case of Coleman v. Miller, the Supreme Court sent the ball back into Congress’s arena of politics on whether ratification by states after the expiration of a time limit had any validity, and whether states were allowed to rescind ratifications. Those questions have remained unchallenged, and therefore unsettled, ever since.

In an episode of the 1970s television show All in the Family, Archie Bunker argues with his neighbor Irene Lorenzo , played by Carroll O’Connor and Betty Garrett, about equal pay for equal work after Irene starts working at the same place as Archie. 46 years after Congress passed the ERA in 1972, the issue remains unsettled.

There has been a development since 1939 that further clouds the entire issue of a time limit on ratification, and that is the full ratification of the 27th Amendment (Congressional Pay Raises) in 1992, after a delay of 203 years since its passing by Congress in 1789. No time limit had been imposed by Congress in 1789, of course, but since it nonetheless became the law of the land after hundreds of years of languishing in the docket, it raises the question of the legality of the decision in Dillon v. Gloss and sets a precedent for proponents of the ERA to follow in seeking to overturn the expiration of its time limit in 1982. If and when a 38th state ratifies the ERA, that state most likely being Virginia, the matter will probably bounce from the courts back to Congress, where it will have to be settled politically, making the upcoming 2018 congressional midterm elections important for yet one more reason. Until then, smile when you feel like smiling, or not at all.
— Vita