April 20, 2018 Techly DoRight
People who prize the best television picture quality available were dismayed when manufacturers discontinued plasma television sets in 2014, leaving them only the option of Organic Light Emitting Diode (OLED) television sets with comparable, or even better, picture quality, but at ten times the price. Prices on OLED sets have come down since 2014, though not to the level of plasma sets, which sold for under $1,000 as they were going out of production. The lowest price on an OLED set is still over $2,000.
Prior to the 1990s, consumers had essentially one option for television set technology, the Cathode Ray Tube (CRT). There were projection television setups available which never amounted to more than a small niche segment of the market. The CRT was capable of excellent picture quality in the areas of color fidelity, contrast, and deep black levels, but it was hampered by poor resolution and practical limitations on picture size because of its bulky form. The poor resolution was primarily an artifact of the television signal available from mid-century through the 1980s at least, and when high definition television signals became widely available after the turn of the century, it was theoretically possible for CRT sets to remain in production with the capability of resolving the high definition signal, however there was still the problem of increasing screen size without the set becoming impractically deep as well. 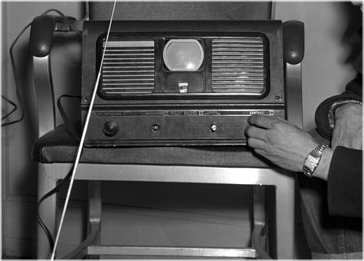 A 3 inch TV set receiver. Photo from The Library of Virginia.
Of the television set technologies competing to replace CRT after the turn of the century – Liquid Crystal Display (LCD), rear projection and front projection, and plasma – LCD emerged as the sets capable of widest distribution because of their lower prices and variety of screen sizes, while both types of projection sets remained niche products, and plasma became the choice of videophiles who didn’t care for the fuss and expense of projection sets. All was well then for plasma set buyers until manufacturers looked ahead to the production of ultra high definition, or 4K, sets after 2010, and the manufacturers of plasma sets, primarily Panasonic, Samsung, and LG, found that it would be difficult to create a plasma set capable of 4K resolution, while the other technologies, including the newcomer OLED, were more amenable. One by one the manufacturers dropped out of producing plasma sets.

In this scene from the 1997 Robert Zemeckis film Contact, with Jodie Foster, an alien race bounces back to Earth the first television signal it intercepted from our planet. Warning: foul language.

The more than acceptable replacement for plasma when it came to picture quality was OLED, and when users of plasma sets needed to replace them eventually they could turn to that option rather than to LCD ultra high definition sets, which had improved over the years but still had their shortcomings reproducing a cinema quality picture. The problem with OLED was the high price, a problem caused partially by LG for some time being the only major producer of the sets. Sony and Samsung have started producing sets, and their competition may induce more significant price drops in the next year than have taken place since plasma sets went out of production in 2104. When it comes to buying technology products, and particularly the television sets of the past twenty years, it takes a keen eye for the markets to know – or rather to guess well – when to take the leap and buy without feeling suckered because the very next fiscal quarter the bottom dropped out of the price, and that $3,000 television in the living room is now selling for less than $1,000 at the big box stores. In any case, the picture quality of an OLED 4K television set would have been unimaginable even twenty years ago, and each person accounts its value differently.
— Techly