No One Gets Out Alive

April 13, 2018 Isidore Gnome
There’s a wonderful feeling that comes with stepping outside into the cool of the evening after a hot day. There are a lot of little things that go toward making life pleasant if a person has been lucky in their circumstances. Living past middle age into one’s sixties and seventies is a great blessing, and while there may be pain associated with such longevity, most people would accept the trade-off. Asking for more life is almost too much. There are others waiting. 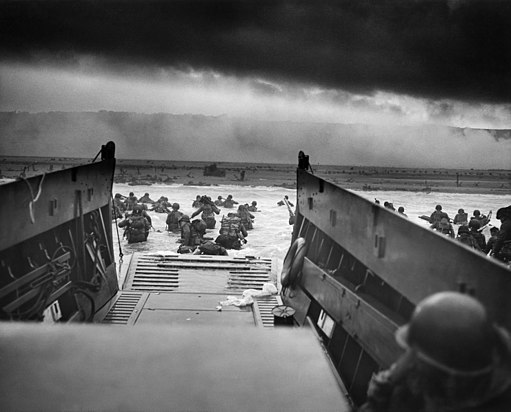 “Into the Jaws of Death”. United States soldiers of the 1st Infantry Division wade ashore on Omaha Beach, France, on the morning of June 6, 1944. During the initial landings on D-Day, as many as two thirds of the soldiers in some infantry companies became casualties. Photo by Coast Guard Chief Photographer’s Mate Robert F. Sargent.
In the Native American cultures of North America, everything is living and everything eventually returns into the cycle of life when it dies, including people. In Old World cultures, and particularly those of Europe and the Mediterranean Basin, almost everything is regarded as dead or inert, and when people die their passing has finality. No one in either culture knows for certain what happens after death, but it seems evident to some people that in a living world where a person is one part joining a river flowing to the sea, there is less terror in death, and more an acceptance of it as a metamorphosis into another part of life.
— Izzy