November 14, 2017 Isidore Gnome
“The days of our years are threescore years and ten; and if by reason of strength they be fourscore years, yet is their strength labour and sorrow; for it is soon cut off, and we fly away.”
― Psalm 90:10, from the King James Version of the Bible.

In any discussion of medical science’s ability to increase the human life span, people seldom question the desirability of a longer life. Certainly the doctors and scientists don’t seem to question it. The assumption always is that if people were offered the possibility of living past one hundred in reasonably good health, they would grab at it eagerly. Why?

Gillian Welch and David Rawlings perform “I’ll Fly Away” on Austin City Limits on PBS in 2011.

Increasing life span is a different ethical matter for medical science than improving health for the time we generally have been allotted. Experimenting on poor creatures who likely have no interest in prolonging the lives of their tormentors, scientists are on the brink of breakthroughs that will allow people to live the length of two ordinary life spans. What for?

Speaking of animals, will the new life lengthening wonder drugs be available for pets? More than likely they will be, at the right price, and there will be wealthy people who would like to see their pets live twenty, thirty, or forty years. But who will consult the pets to determine their wishes? Can human beings be absolutely certain they are the only creatures who understand life, and what it means to continue living, and making one’s peace with death, particularly when death might mean a rest from living and possibly a progression on to something else? 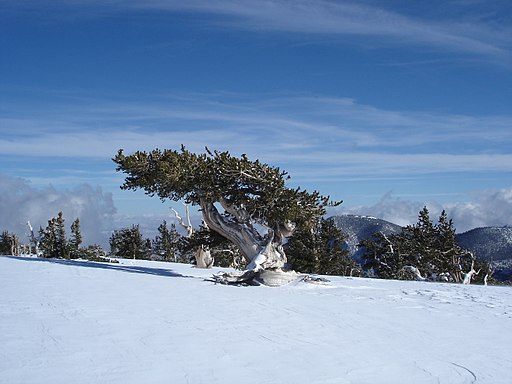 A Great Basin bristlecone pine, Pinus longaeva, in snow in the Great Basin National Park, Nevada. These pine trees can live thousands of years. Photo by the National Park Service.
The quest for extending life at whatever cost seems similar to the obsession with staying young at whatever cost. Growing old means more aches and pains, certainly, but at the same time there is relief from some of the urges of youth that overpower reason. Sticking around an extra long time makes sense only if the quality of that longer life is not only bearable, but enjoyable, and if population growth is near zero. There might be fewer grandchildren, but more great grandchildren, and great great grandchildren, and so on. Still, eventually it could get difficult to shake the feeling of staying too long at the party, a guest who doesn’t comprehend the kindness of bowing out gracefully.
― Izzy