April 10, 2018 Techly DoRight
Some of the processed food for sale at grocery stores and restaurants purports to be like home cooking, and other processed foods make a name for themselves by advertising their intention to go beyond what’s available from home cooking. The Doritos Locos Taco from the fast food restaurant Taco Bell, and the Double Down Chicken Sandwich from Kentucky Fried Chicken are advertised as so different and so unlike what home cooks could easily whip up that to get the full experience at a decent price consumers might as well visit the restaurants and order those items because it’s easier than trying to duplicate them at home. 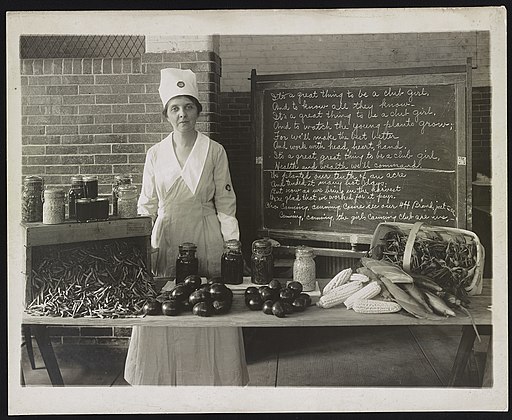 This 1917 photograph depicts Mina Van Winkle, head of the Lecture Bureau of the U.S. Food Administration during World War I, explaining Victory gardening and food processing to support the war effort. Photo from the Library of Congress.
When processed food first became widely available to American consumers in the period between the two world wars, the aim of the purveyors was to assure consumers the products were as good as home made and perfectly safe. There was no specific attempt to manufacture exotic foodstuffs, though from the start convenience was a selling point. The trend continued after World War II, with refinements learned by manufacturers in producing canned foods like Spam on a massive scale for service members overseas. Food processors marketed TV dinners in the 1950s with assurances of quality and convenience, not with any idea that they were different or better than what a home cook could produce given the time and inclination. 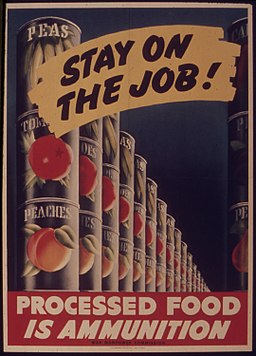 World War II poster from the Office for Emergency Management of the Office of War Information.
It was in the post World War II years that fast food operations, some of them, like Kentucky Fried Chicken, with beginnings in the years before the war, really began taking off in popularity, expanding across the landscape along with the newly built interstate highway system. Their offerings were traditional, and like the processed convenience foods for sale at supermarkets they mainly stressed the convenience of their food and that it was as good as homemade. It was for pricier restaurants to claim their food was better and fancier than homemade. Consumers visiting fast food establishments mainly wanted assurance the food was cheap, fast, safe, and of a quality on a par with homemade. 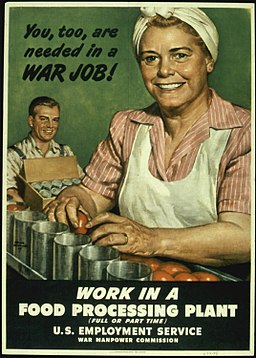 World War II poster from the Office for Emergency Management of the Office of War Information.
In the past 20 years all that has begun to change as consumers have drifted away from cooking the majority of their meals from scratch themselves to either resorting to convenience foods from the supermarket or eating out. The emphasis has changed in the marketing of supermarket convenience foods and fast food restaurant offerings from nearly apologetic claims that they are as good as homemade to stating that they are beyond that and are now in varying degrees gourmet, healthy, exotic, and even comparable with fancy restaurant food at half the price. Their claims are not all hyperbole, and for the most part a well-made TV dinner of today tastes better and is a better value than a comparable TV dinner of 30 or 40 years ago. Food scientists and technologists have indeed done wonders.

The question remains, however, whether consumers are any better off or healthier for having largely abandoned home cooking in the first place. Yes, the taste and quality and variety of convenience foods from the supermarket and fast foods from inexpensive restaurants have never been better, but at the same time people have never been fatter, with all the health problems that come with being not just overweight, but obese. It seems there’s a hidden price to all the convenience and deliciousness whipped up by food scientists in the labs of giant food companies like Nestlé and Yum! Brands (owners of Taco Bell and Kentucky Fried Chicken restaurants, among others). That’s something worth pondering the next time you’re shopping the frozen food aisle of the supermarket or cruising a commercial strip for a fast food outlet for your next meal – whether the exotic, fancy dishes they’re offering at low prices are really as good a value as they want them to appear to be, with their mile long list of indecipherable ingredients and unrealistically slight portion amounts, which make their salt, sugar, and fat percentages look more reasonable than they really are. No one but the rich can get away with eating fancy, rich foods every day, because they have the money for all the doctors and health spas it takes to balance out an indulgent lifestyle. They’re not eating the cheap, ersatz stuff anyway.
— Techly