March 30, 2018 Vita Historia
Viewers of American television shows from the 1950s, 60s, and 70s might have noticed that the families on shows of that era seemed to have lamb chops for dinner rather often, or certainly more frequently than most Americans eat lamb or mutton now. This doesn’t approach anything like a scientific proof of declining consumption of lamb and mutton since the mid-twentieth century, and at that it would only prove a decline among the demographic of the white Anglo-Saxon Protestants who were the main representatives of Americans on television then, but there it is nonetheless. On old shows like Father Knows Best and Leave it to Beaver, the characters were eating lamb chops regularly, but after the 1970s hardly anyone ate lamb chops anymore. 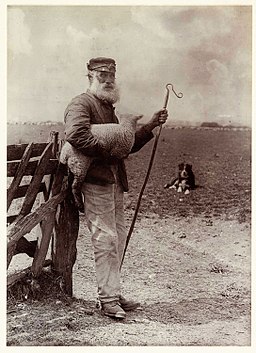 A British shepherd with a lamb and his Border Collie in the 1890s. Photo from the National Media Museum of the United Kingdom.
Ham has always been more popular in Middle America than lamb, and Easter dinner was no different. It was in immigrant communities in the cities of the east and west coasts that lamb was popular, at Easter or anytime. Nevertheless, through the middle years of the twentieth century lamb and mutton were widely available throughout the country and competitively priced with other meats at supermarkets and butcher shops. Much has been made of the learned distaste for canned mutton among service members returning from overseas duty in World War II for the eventual decline in popularity of sheep meat in America, but statistics and anecdotal evidence of the popular culture as represented on television programs discount the impact of that one factor.
The increased use of synthetic fabrics over wool contributed to the drop in sheep herding, but that also is overemphasized, considering that synthetic fabrics gained ground in other countries as well, places like Australia and New Zealand where sheep herding remains a large part of the agricultural economy. What separates American sheep raising culture most from the rest of animal husbandry is the difficulty of conforming it to the needs of large scale agribusiness. In the generations after World War II, when family farms were swallowed up in large numbers by agribusiness concerns which consolidated the raising of chickens, beef cattle, and pigs into factory farms, the raising of sheep, and particularly lambs, resisted conforming to factory farm standards. As a result, American lamb and mutton became more expensive than comparable weights of chicken, beef, or pork.

American sheep herding declined to a cottage industry, which had the ironic effect of insulating it further from the factory farming practices which had taken over other areas of animal husbandry by the end of the twentieth century. The mutton and lamb available in Middle American supermarkets in the same period was likely as not imported from Australia or New Zealand. The imported meat was cheaper than American raised mutton and lamb despite the long shipping distances because of the economies of scale in those countries, where sheep were still raised in the tens of millions. Americans generally did not favor the imported meat over beef, chicken, and pork, however, because of the “gaminess” they noted in it, a product of the types of sheep raised in Australia and New Zealand and the pasture they were raised on. Americans had gotten so used to the blandness of meat produced by grain diets for factory farmed animals that they started rejecting anything stronger.

From The George Burns and Gracie Allen Show of the 1950s, the two performers reenact one of their vaudeville routines for announcer Harry Von Zell.
As Americans begin to reject factory farming out of both the inhumane nature of it and the unhealthy food it produces, prospects for sheep herders in this country are improving. Considering the practices most, but certainly not all, of them have adhered to over the last half century through some bad times, it’s not that they ever went anywhere, but that the rest of us did and are now drifting back to them in dribs and drabs. If it weren’t for the support of the immigrant population and their preference for American lamb and mutton, the sheep herders here would not likely have survived the lean times in sufficient numbers to crank up operations again with the promise of supplying more Easter dinners. Of the lambs the best that can be said is that unlike many of their unfortunate cousins on the factory farms their lives, however brief, may be more natural and even peaceful.
— Vita