March 18, 2018 Editor
“There are more things in heaven and earth, Horatio,
Than are dreamt of in your philosophy.”
— Hamlet to Horatio in Act I, scene v, of Hamlet, by William Shakespeare.

It’s fair to say most people in the Western world are more or less familiar with the Judeo-Christian Bible and the Ten Commandments in its Old Testament books of Exodus and Deuteronomy, which they honor perhaps more in the breach than in the observance. There is an Eleventh Commandment which is known to few people other than some evangelical Christians, and it addresses how to treat others in what might be considered a reverse or Bizarro Golden Rule. The Golden Rule is common to many religions around the world and is stated many ways, but the formulation probably most familiar to Westerners is “Do unto others as you would have them do unto you.”

The Bizarro Golden Rule, also known as the Eleventh Commandment, informs adherents to “Be mean-spirited with those you dislike or disagree with, and as spiteful and hateful in your dealings with them as satisfies your shriveled, churlish spirit.” The latest Christian conservative to scrupulously honor the Eleventh Commandment is Briscoe Cain, a Republican state representative in the Texas legislature, who, soon after the death of English physicist and cosmologist Stephen Hawking on March 14, tweeted the following passive-aggressive remarks: “Stephen Hawking now knows the truth about how the universe was actually made. My condolences to his family.” 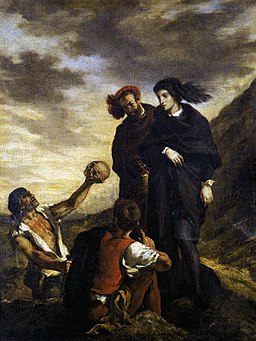 Hamlet and Horatio in the Graveyard, an 1839 painting by Eugène Delacroix (1798-1863).
If there was any doubt about the veiled hostility in his tweet, Mr. Cain later took away the veil by elaborating on his dislike for Mr. Hawking’s atheism and supposed mocking of God. As egregious behavior from a mean-spirited Christian conservative, or evangelical, this is small beer. It nevertheless illustrates a mind set that has corroded civil discourse in public life, and how nothing will stop such a person from taking pot shots at perceived or imagined enemies, even the recent death of perhaps the most well-known and generally beloved physicist since Albert Einstein. Stephen Hawking’s atheism was his own concern, something he never forced on others, unlike the behavior of many evangelical Christians like Briscoe Cain. As for mocking God, even if Mr. Hawking did such a thing only in the eyes of Mr. Cain, surely God is big enough to forgive and forget.

That is not the God of Briscoe Cain and others like him, however, who apparently see in God much of what they dimly perceive in themselves: a smallness of spirit, mean, petty, and vindictive, with spite considered a virtue, and charity withheld from anyone deemed Other. One would feel sorry for such small minded people if not for the tremendous damage they do to the rest of society every day. In this material world, Stephen Hawking will be well and fondly remembered by future generations, while Briscoe Cain’s legacy will fade away except for the enduring stain of his negative contributions, may they amount to no more than his snide remarks made at the expense of a person who never did him any harm.

But in Mr. Cain’s view, it could be Mr. Hawking did do him harm by denying his God and, worse, supposedly mocking that God, which to a person with fragile self-esteem is the same as denying him, not just Him, and mocking him, not just Him. For people like that, all their sense of self worth is bound up in their God, and how their God is regarded or disregarded by others is taken personally by them. In the next world, if there is one, perhaps Briscoe Cain and his vindictive and insecure co-religionists will be fortunate and discover a God more beneficent and embracing than the God they envisioned and claimed to embody here on Earth, and inflicted upon everyone else without concern for whether others merited simple human kindness and respect regardless of their religious beliefs.
— Ed.