March 13, 2018 Techly DoRight
There are so many surveillance cameras in private and public spaces watching private citizens that it seems the only way to redress the imbalance is for private citizens to start recording corporate and government officials with surveillance cameras of their own. Recording business representatives on their property without their permission would be legally permissible only on publicly accessible portions. Recording public officials, however, such as police employees, would be much easier since much of their business is conducted in public and because they are, well, employees of the public.
The police employees themselves will often dispute the right of citizens to film them as they go about their business, and intimidate filmmakers into shutting off their cameras and even turning them over to the police. Those tactics are illegal, and cops who use them are doing so either out of ignorance of the law or, more likely, in anticipation of ignorance of the law on the part of the filmmaker. It’s interesting that the increasing surveillance in public of private citizens by corporate and government entities is justified by asserting “If you’re not doing anything wrong, then you have nothing to worry about”, but the same entities do not feel their dubious logic applies to them when the public films them going about their activities. 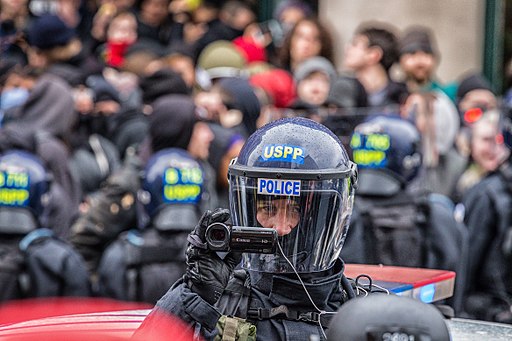 A U.S. Park Police (USPP) employee takes video of spectators observing an incident in which the USPP had kettled a group of people at 12th and L N.W. in Washington, D.C., on Inauguration Day, January 20, 2017. The USPP officer has his back to the kettled group. Photo by Mobilus in Mobili.
Dashboard cameras, many of them with audio recording capabilities, are increasing in popularity mainly for insurance purposes in the recording of accidents. Some auto manufacturers have started including them as standard equipment or options, and therefore they are not entirely after market purchases by car owners anymore. What some car owners tend to overlook is the usefulness of dashboard cameras in recording interactions with police employees. Police have themselves had dashboard cameras for about 20 years, and body cameras are becoming more prevalent every year. The question is how much a citizen can rely on evidence provided by police dashboard cameras and body cameras in any interaction with police employees.
The police have cameras, which they can and do turn off, or the footage of which they can and do selectively edit. It’s well past time for the general public to have cameras in the same abundance. In their cars, for instance, they should have not only a dashboard camera pointed forward, but a rear dashboard camera pointed backward, because that is where a roadside stop by a police employee will end up if it goes outside, with the cop and the driver between the back of the driver’s car and the front of the squad car. All cameras should have the ability to swivel on their mounts, which in the case of the front pointing dashboard camera would allow it to capture the interaction with the police employee at the driver’s side window. All cameras should also have audio capability, though it is important to remember to advise passengers in the vehicle if this feature is on. Police employees do not have to be informed, because they are engaged in public business. 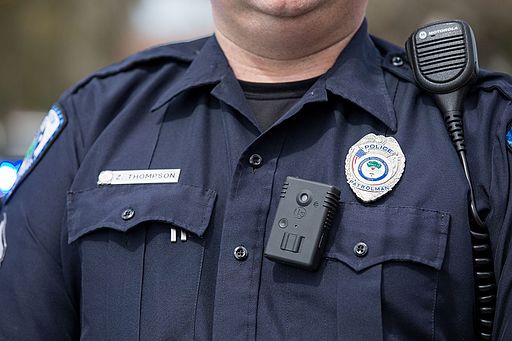 Police employee with bodycam in North Charleston, South Carolina, in March 2016. Photo by Ryan Johnson.
So many people have smartphones now that it may seem unnecessary to buy and install more than one dashboard camera in a vehicle. If the need arises, people think, they can always take out their smartphone and film the interaction with the police employee. There are a few things wrong with that idea. The first is that for most people, who interact with police rarely, getting stopped by a police employee can be intimidating and make them nervous, which in turn may make it difficult or impossible for them to get out their smartphone and point it directly at the police employee, making it obvious they are filming them. Secondly, for some aggressive police employees who don’t know or don’t care about the constitutional rights of the citizens who employ them, pointing a smartphone camera at them is like waving a red cape in front of a bull. It’s much easier and less conspicuous to reach up quickly and turn the dashboard camera toward the driver’s window, making sure to enable audio.

The Conversation, a 1974 film by Francis Ford Coppola, is about an audio surveillance expert, though in general the topic becomes the loss of privacy in the electronic age.

It’s a shame it has come to this, where the public feels they have to protect themselves against the very people who have sworn to serve and protect them, people who use public funds to trick out publicly funded squad cars in thousands of dollars worth of the latest technology, and themselves in quasi military gear and vehicles for the purpose of intimidating and beating down the citizens who pay their way. For the time being, it may appear out of control police employees are hurting only minorities and the poor, but that will change as they see they can get away with it, as they have. Any day now, the mistreatment will become indiscriminate, because that is the way of things like this. Psychotic bullies will beat up on almost anyone, middle class white people included, if they step out of lines that are ever more narrowly defined. They will beat up on almost anyone, that is, except the rich who are their real masters. Protect yourself with as many cameras as they have, if you can, because you can’t afford as many lawyers.
— Techly