March 6, 2018 Isidore Gnome
There appears to be no consensus among scientists about what pets do for people emotionally and how that affects our health. Some say pets have a calming effect and tend to stabilize the blood pressure of people who interact with them. Others say there is no evidence to support those assertions, and that having pets as we understand the practice today in western culture is a social interaction between people, with the pets considered as something like accessories. The truth most likely can be found within each person, and not universally for everyone.
It’s somewhat simpler for scientists to understand how people have changed animals as they domesticated them, eventually turning some of them into pets. Physical and emotional changes worked together to bring about the domesticated creatures we share our lives with today, with people intervening in their reproduction to secure preferred traits. Genetic predisposition of particular animals also played a part, as we see with the enormous variability in physical and temperamental characteristics of domesticated dogs. Compared to cats, the genetic malleability of dogs is enormous. It has made the Westminster Kennel Club Dog Show a spectacle of great popular interest. 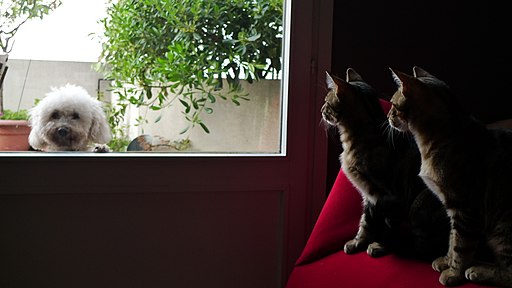 Cats watching a dog through a window. Photo by Thierry Wagner.
Since scientists can’t agree on what pets do for us, however, it’s best to rely on personal experience, unscientific as that may be. Different people will have different feelings toward their pets, and that affects how the pet reacts to them and colors the entire relationship. For some people a pet is not a full-fledged part of the family, but an outlier who is expected to make do with accommodations outside in the yard. This type of relationship was the norm 100 years ago, and much less so now. People keep hunting dogs outside in kennels of varying degrees of comfort, and those people do not consider their dogs as pets. Much more the norm now is for people who consider their animals as pets to give them access to the house and treat them more or less as part of the family. 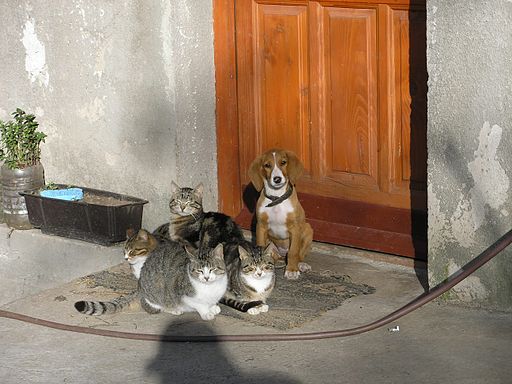 Cats and a dog in sunshine by a door. Photo by Orlovic.
The main thing to understand about a relationship with a pet is that you get out of it what you put into it, and in that respect it is no different than any other relationship. The person who keeps a dog confined to a kennel outdoors in all kinds of weather merely to let the animal loose several times a year for hunting is not engaged in a loving relationship, and the very idea would strike that person as preposterous. For such a person, the dog is perhaps a step up in their regard from their pickup truck, but at bottom it remains a utilitarian relationship. A farmer who keeps fodder and corn to keep livestock looks upon barn cats the same way, since the cats are kept around mainly for dispatching rodents, and there is little if any affectionate interaction between the farmer and the cats.
For a depressed elderly person in a nursing home, a visit from a friendly dog or cat can be every bit as uplifting as a visit from a beloved grandchild. Whether some scientific studies say there’s nothing to that interaction is besides the point; what matters is how that person feels about it, and of course what they feel about the interaction is influenced by what they brought to it. Just about any animal is a good reflector of the behavior and attitude they get from people, a better and more honest reflection than what people can muster, because animals lack guile and the human talent for obfuscation. What you see is what you get. Not always, because mistakes in communication can happen, but most of the time, an animal, and especially a pet animal, knows your mood better than you do, and will care for you emotionally in equal measure to the care you give, and sometimes more than you deserve.
— Izzy