February 13, 2018 Techly DoRight
There are several time and temperature combinations for pasteurizing milk, but one of the most common involves heating it to 161 degrees Fahrenheit for 15 seconds, known as High Temperature Short Time (HTST). The milk still needs refrigeration afterward to slow the growth of microorganisms that may remain in it, since pasteurization kills most of them but does not completely eliminate them from the milk. In Europe, milk is most often treated with Ultra High Temperature (UHT) at 275 to 302 degrees Fahrenheit for 4 to 15 seconds, making it aseptic and capable of being stored at room temperature for up to six months. Both processes have grown out of public health measures which have transformed food safety over the past 150 years, a period when such oversight was especially needed as increasing urbanization meant fewer people retained direct connections to the production of their food. 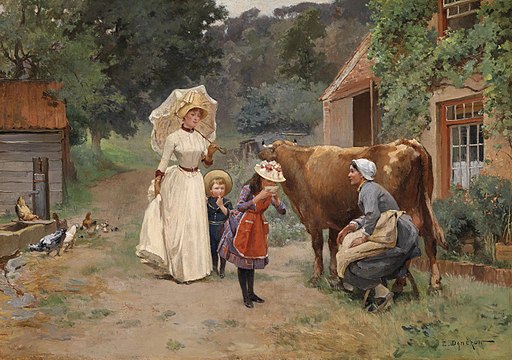 Visit to the Farm, painting by Emile Charles Dameron (1848-1908).
The body temperature of a cow is 101.5 degrees Fahrenheit. That is well below the 145 degrees Fahrenheit which is the absolute minimum for any kind of effective pasteurization. Drinking raw milk can be safe for only a short time before any pathogens present in it start to proliferate. Calves have understood this for millennia, which is why they have never bothered with any storage measures. They drink mama’s milk straight from her udder, and that’s been good enough for them. Things are different and more complicated with humans, as they always are. To begin with, it’s strange for one species to be drinking the milk of another at all. Be that as it may, people have decided they enjoy drinking cow’s milk, and apparently have done so for millennia, though not as long as the calves the milk was meant to succor.
In the ensuing thousands of years, and especially in the past 150, people have moved off farms and into cities in such great numbers that the majority of them now do not come any closer to cows than a hundred yards or more on a drive through the countryside. This means they have little idea of the conditions those cows live under and are milked under, and also rarely have the opportunity to drink that milk as it was meant to be drunk, at 101.5 degrees Fahrenheit within seconds of milking. So to get around all that we cook the milk. Raw food can be a great, healthy addition to anyone’s diet, but for the sake of safety we cook a lot of our food, and particularly food we haven’t grown or raised ourselves and aren’t prepared to consume immediately. Cooked food must be an acquired taste, because obviously in nature food is seldom cooked. Our ancestors must have discovered good reasons to cook food, probably through much trial and error involving unfortunate intestinal distress or even death. Louis Pasteur observed under the microscope the reasons for our ancestors’ common sense use of fire to cook food. Cooking food may not be the most natural thing, but it’s better than guessing and throwing the dice. Fire is good.
— Techly