February 6, 2018 Isidore Gnome
“To see a World in a Grain of Sand
And a Heaven in a Wild Flower,
Hold Infinity in the palm of your hand
And Eternity in an hour.”
— William Blake (1757-1827), Auguries of Innocence

Biophilia – love of life – is a term popularized by the American biologist and naturalist Edward O. Wilson in his research and books of the last two decades of the twentieth century. Mr. Wilson was interested in how humans appear to require some connection with nature no matter how much the modern world tends to divorce them from that connection. City dwellers in particular may be live amidst steel and concrete structures to such an extent that they never step on grass in the course of an average day, but they still will find comfort at home in tending a few houseplants and a pet or two. Mr. Wilson proposed that the need to maintain a connection with nature was so pervasive in humans that it went beyond culture to genetics, and was therefore innate and undeniable. Humans may pretend to be above nature and separate from it, but their genetics and behavior said otherwise. 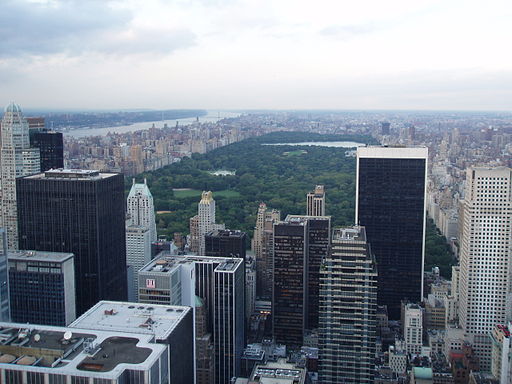 Looking north at Central Park from the top of Rockefeller Center in midtown Manhattan. 2009 photo by Piotr Kruczek.
Scientific research since then has confirmed Mr. Wilson’s hypothesis, some of it confirming common sense notions such as how hospital patients with window views of trees and greenery appeared to recover faster than ones with a view of the building next door. The idea of biophilia itself appeals to common sense, but science needs to quantify things, and that’s for the best because there have after all been other notions in the past which seemed common sense, such as the Sun revolving around the Earth. Lately there has been a resurgence in belief that the Earth is flat, though it’s hard to tell just how seriously Flat Earthers expect to be taken by everyone else, or even by themselves.
Everyday proof of biophilia, however, seems so commonplace that it is hard to refute. Still, there are people who live for making their environment as sterile and devoid of nature as possible, and it seems there are more of them now than ever. Children especially seem to have withdrawn from nature both on their own and because of their parents’ protective instincts. Children now spend an inordinate amount of their time in front of screens, and much of the remainder of their time is structured education or play. They are seldom left on their own to scratch around in the dirt in their backyards and observe the ants at work, as Edward O. Wilson himself did for countless hours as a youngster and, indeed, as an adult, since his specialty as a biologist has been myrmecology, the study of ants. 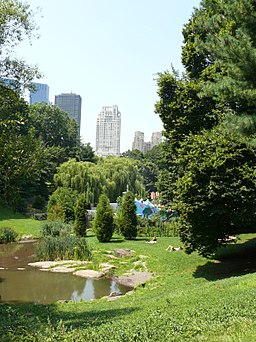 A western part of the 843 acres of Central Park in New York City. Recent appraisals of the value of Central Park’s 1 and 1/4 square miles of prime real estate in the middle of Manhattan are well over $500 billion. May biophilia influence New Yorkers for generations to come so that they continue to prize Central Park for its connection to nature rather than its speculative value in dollars. Photo by Ad Meskens.
The steep drop in hands-on discovery of nature among the latest generation does not bode well for future conservation measures when those children grow up and start making their own decisions. Reading about a tree in a book can take a person only so far without the furtherance of education granted by resting under the shade of a tree on a hot day. Even the tactile act of reading a paper book, its pages made from trees, gives the senses a greater depth and breadth of perception than reading from an electronic screen. We are animals, with the senses of animals, and we engage the world through those senses every bit as much as we engage it with our brains, even when we are cut off from nature. But with a lack of input from our senses our decisions about the natural world are likely ill-informed, and much as we might try to help conserve animals, plants, and resources, we are not doing as much as we could because they are not part of our everyday world. How can you love the natural world which supports you if you cut yourself off from it and avoid embracing it with not only your intelligence, but with all your senses so that you can feel it as well as know it, and understand thereby you are a part of it and not separate from it?
— Izzy