January 26, 2018 Techly DoRight
After the Federal Communications Commission (FCC) five member board voted along party lines to roll back Net Neutrality regulations last month, it wasn’t surprising to see some major Internet Service Providers (ISPs) trot out rate increases soon afterward. The new regulatory structure doesn’t take effect until 60 days after it is published in the Federal Register, which may take a few more weeks while the FCC completes final edits to the paperwork, but companies like Comcast just couldn’t wait. Meanwhile, in another predictable outcome of the end of Net Neutrality, over 20 states have started instituting their own rules in an effort to adhere to the old guidelines, while also suing the FCC to prevent it from trying to impose its new rules within each state.
This comes down to regulating interstate commerce in the form of communications companies, which is the only reason for federal agencies such as the FCC to exist. It will all have to be sorted out in the courts, and that could take years and many millions of taxpayer dollars, all because FCC Chairman Ajit Pai turned a deaf ear to the majority of Americans while he listened very closely to his corporate masters, such as at Verizon, where he worked as a corporate lawyer before being appointed to the FCC by President Barack Obama, at the behest of Senator Mitch McConnell (R-KY). 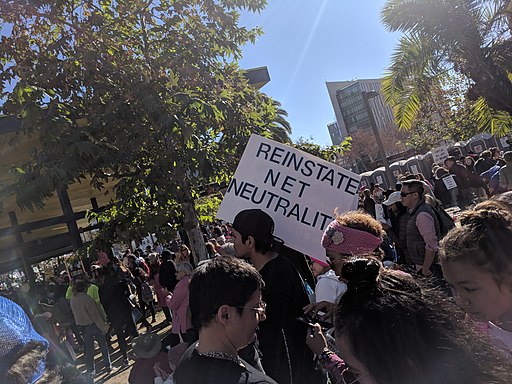 “Reinstate Net Neutrality” sign at the January 20, 2018, Women’s March in downtown Los Angeles, California. Photo by Cory Doctorow.
There have been noises from Congress about legislating Net Neutrality, or a semblance of it, once and for all, thereby stripping the FCC of its bouncing ball regulations. Even if one of these measures manages to squeak by with enough votes in Congress, it will then cross the whistle-clean desk of Supreme Leader, who after all is the one who elevated Ajit Pai from FCC board member to chairman, most likely with the express purpose of encouraging him to gut Net Neutrality for the benefit of corporate giants. Supreme Leader will veto any legislation that undercuts his man at the FCC, and there will not be enough votes in Congress to override his veto, since that would require the votes of two thirds of the members.

One of the ironic slogans used by the non-profit organization Fight for the Future to promote the July 12, 2017, Day of Action to Save Net Neutrality.

In that case, it appears everyone will have to get used to paying through the nose for broadband internet service in areas of the country where there are only one or two providers, which is to say most areas. Consumers could pay less in a tiered system for service at the speed of dial-up, which is what the FCC has opened the door to now. Instead of being regulated like utilities, which must provide similar service to all consumers universally, the ISPs will be regulated like cable television companies, a business some of them have also been in for years.

The problem vexing consumers is that they usually have few choices for providers of these services, although they have slightly more choices than they do when it comes to their electric service. Still, in a market with limited competition, the advantage lies entirely with the unregulated company that is unfettered to charge whatever it can squeeze from captive consumers. Take it or leave it.
“Wildflowers”, the title song of Tom Petty’s (1950-2017) solo album from 1994.
The last area where ISP giants are working to complete their cornering of the market is in the contest over municipal broadband services, which are usually public/private partnerships between municipalities and smaller ISPs, where the municipality provides some infrastructure and subsidies, and the private company provides the hardware, operations, and maintenance. Municipal broadband often provides better service and better rates to consumers than they can get from the big companies, and is likely to provide service to poor and rural consumers who otherwise would have no service options. No wonder the big companies are intensively lobbying state and local officials to choke off municipal broadband. It appears their greed compels them to throttle competition and now, at their discretion, some services to their customers.
— Techly