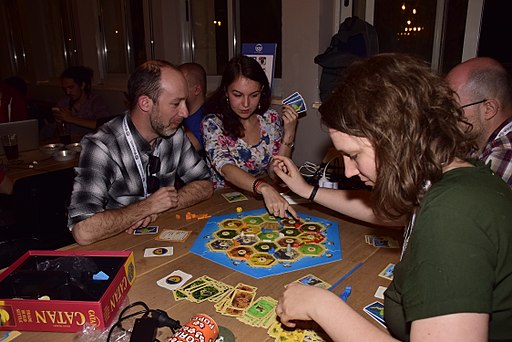 Players at a game of Catan during the April 2016 Wikimedia Hackathon in Jerusalem, Israel. Photo by Ariel Elinson.
The German board game Settlers of Catan, now known simply as Catan, first published by Klaus Teuber in 1995, changed ideas around the world about what board games could be and led the renaissance in the form that has seen huge growth over the last 20 years, primarily among young adults. Catan is competitive, just like many board games of the past like Monopoly and Risk, but unlike those games it does not eliminate some players before the game is over, and therefore everyone who starts the game holds on to a chance at winning until the end. It is competitive, but not reductive.
That game dynamic, which has come to define most of the board games coming from Europe, and particularly Germany, in the last 20 years has become known by the shorthand Eurogames. The games are overall competitive in nature while incorporating elements of cooperation and degrees of engagement with, or isolation from, one player to the other players as suits an individual’s personality or strategy. The character of the games can be seen as socialist rather than capitalist, as in Monopoly. Warring and confrontation are similarly sidelined in favor of building or collecting. A player still strives to outdo the others, though not entirely at their expense. The games are not zero sum games, where one player ends up with everything and the others are left in ruins. 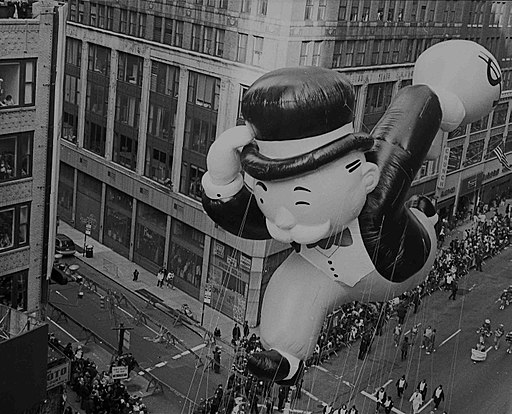 A balloon of the Monopoly mascot, Mr. Monopoly, also known as Rich Uncle Pennybags, at a Macy’s Thanksgiving Day parade in the early 2000s. Photo by Fluffybuns.
The genius of these games coming out of Europe is how they tap into the better parts of our nature without resorting to banality, which of course would ensure they got played exactly once before finding a place on a closet shelf, there to be ignored ever after. The game designers understand the duality of human nature, and they give play to both sides, and in the best games, such as Catan, they appear to have achieved a balance, a yin and yang duality, if you like.

A scene from Stanley Kubrick’s 1987 film Full Metal Jacket, with Matthew Modine as Pvt. J.T. “Joker” Davis being upbraided for not going along with the program. Warning: foul language.
Many of the older games, like Monopoly, much loved as they were, gave vent primarily to the aggressive, greedy side of our nature, and people mistakenly thought that was who we were, and all we were. Pillaging and destruction of competitors may be all fun and games for a certain limited part of our psyches, and honesty demands we acknowledge that is part of who we are. But it is only a part, and the rest of our spirit seems to demand we fulfill our need to build and create, urged on still by that core desire to do it as well as we possibly can, and if that results in greater and grander returns than everyone else can achieve, then so much the better. All in good fun, of course.
― Vita